Hillary and The Donald 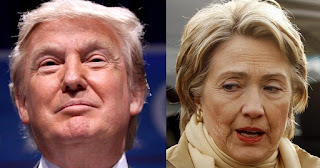 Our country has truly dropped to a new low with these two as the front runners to be President.   Donald Trump is a wind bag egomaniac with not one ounce of class.  He calls his opponents names and gives out their phone numbers to the public.  It's like watching a mob boss run for President.  He runs his mouth about what he's going to do with no explanation of how he'll do it.  The only thing I've agreed with that has come out of his mouth was the comment he made on O'Reilly that our country is in trouble and on the decline.  He is living evidence of that fact.

Hillary Clinton is a liar and a hypocrite.  She is most likely the reason for the debacle that was Benghazi (and the deaths of all those people, including our Ambassador to Libya)  and she has been carefully getting rid of evidence to that fact.   She is fake and impersonal and is only in her position because she is married to President Clinton.   It has just come out in an editorial in the Wall Street Journal that she and Bill donated $15 Million to charities  over the years 2007-2014.  The charity?  The Clinton Foundation of which the two of them benefit from greatly - personal jets, political trips, etc... They donated to a charity and the charity is them !  So, she and Bill got tax deductions, ergo "government subsidies",  to support their ambitions..... to run the government !   Now THAT, is rich.
Once again,  I can't believe how absurd our process of selecting leaders is today.   With 310 Million people we should be able to do much, much better than this.  This is ridiculous.   Why must we go on following what each of the parties select for us when they are of the ilk that Hillary and The Donald are.  They don't come much more crooked than this folks, and they are the front runners for each of our beloved parties.  May God help us all and may God help our country.

Posted by Marshall in the Middle at 9:13 PM