Election Process Fails All of Us

It's all a game.  That's what the problem is with our election process.   It has turned into a game- just like football or basketball- where we have the Left VS the Right and it all becomes about the game and not about the actual issues.  The ideas to fix our country are never the focus.  This is why nothing ever gets fixed and why we're in the middle off the most inept., incompetent, disgraceful government the United States has ever had.  It's all a game.  When the focus is the disagreement then the solutions become secondary.  When the focus is specific faults of the candidates' personalities that have nothing to do with leadership., then it's a game.   When it's about who can get the most attention due to outrageous comments,  then it's a game.   The citizens of the United States and the world deserve better than this !  I mention the world because we are the leaders of the world.  The world has little hope of stability and prosperity under the leadership of any other country.  We are it, and we've turned the entire process of Democracy into a game.

Who's at fault for the game we call politics ?  We all are, because we'd rather watch the candidates at each other's throat than listen to plausible solutions.  We want the game because it's easier to lay back and be entertained rather than think hard about the issues and work to distinguish who can help move our country and the world towards solutions to the problems at hand,  The half-truths that the candidates feed the people are meant for the uninformed American public because it's easy to confuse an issue and disguise the truth from the people under such circumstances.   Political ads, at their core, are all lies.  We're so close to solving serious problems but the brass ring continues to elude us.  We still have wars and recessions and poverty and pollution and uneducated children because we refuse to cooperate and be smart and select leaders who will lead us and bring solidarity and progress    We refuse to do the work that needs to be done therefor we allow the political parties and the media and special interest to lead us by the nose down roads that lead to THEIR  prosperity and THEIR opportunity and THEIR power.  We are the enablers.

What's the solution ?  1) Remove money from election process in totality. There was a time when elections were the candidates, the voters and a ballot box.   The problem is there's  money to be made, but why is that the obligation of the citizen to allow that ?   2)  Remove any and all advantages that the dominant political parties have in the election process AND in the governing process.  In the beginning of our republic there were no parties and things still "got done".  3)  Educate our children to understand and scrutinize their leaders and to participate in the government.so that they see the complexity of the issues not the "black and white" that we've all been brought up on;  the "left vs "right", "Democrat vs Republican", "conservative vs liberal"  bunk that the media has spoon fed us for so long.  It only behooves  them and their political cronies to maintain the status-quo.  There will always be disagreement, but that should not stop action to  minimize the struggles of the every-day citizen and to encourage liberty and the pursuit of happiness.  We have it in our power to do this.  We owe it to our children to fix this thing we call politics.


Posted by Marshall in the Middle at 9:57 PM No comments: Links to this post

The Federal Deficit and Trinkets 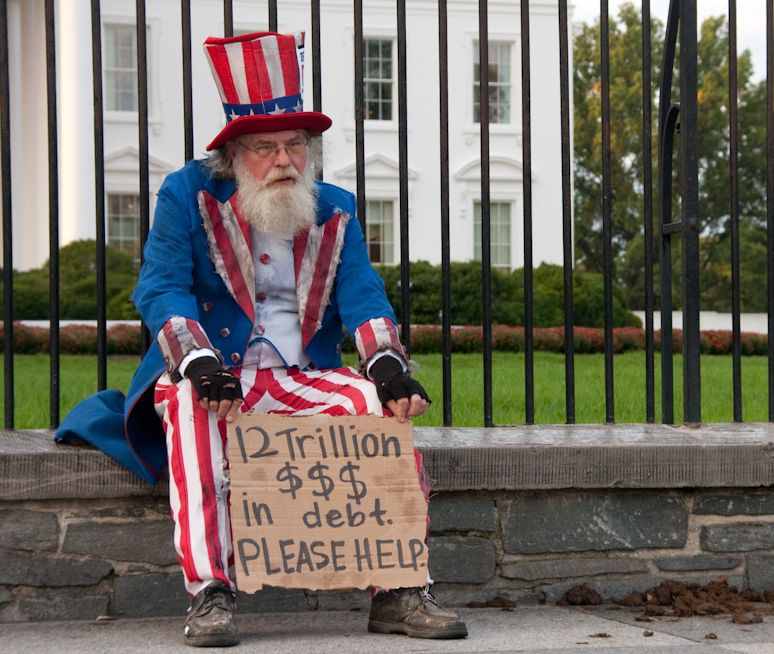 Is it just me  or does it seem like both parties are missing the mark on the deficit ?   The Democrats see it as “no problem” and they’re perfectly willing to spend more money with new ideas for funding every manner of life to the lower income public;    Community college, medical,  cell phones.  Perhaps they can start sending poor people on cruises so they can clear their mind and  “find their center”.    They offer trinkets to the poor folks--- it’s what they do !  It’s best described as “Socialism".  "You vote for me and I'll get you things".

The Republicans, on the other hand,  see it as a problem but they’re much more inclined to CUT taxes since that would “bring more jobs”  (and I suspect it wouldn’t hurt those that fund their careers too much either).   But,  if they were totally honest they would admit that there is no clear “causal” effect between cutting taxes and the consequent jobs that would be created... besides at 5% unemployment I don’t think the the situation is that urgent.    Certainly not to the level they claim with their siren calls for more jobs !  Also, as I understand it,  if you cut taxes that will INCREASE the deficit, not reduce it.   There IS a causal effect there !  So, with all due respect to their need to help out our wealthy countrymen,  I don’t see how that’s going to fix the problem we have.     In a nutshell,  the Republicans offer trinkets to the rich folk in the way of tax cuts and tax advantages to the largest corporations.   It’s best described as  “Crony Capitalism”.  "You fund me and I'll help you get away with things".

I’m in the middle and I want trinkets too.  I want a government that recognizes the severity of the situation and is willing to cut the waste of our bloated government and revisit  our process of taxation so that it makes sense.  Let's get money coming in from EVERYONE – including the spoiled rich cronies that fund the politicians’ careers.    I want the trinket of the peace of mind that must come when you have a wise government that makes sage decisions for the good of the country.   It’s best described as  “Common Sense”.   "You vote for me and I'll do my job".

Posted by Marshall in the Middle at 3:06 PM No comments: Links to this post

The Age of Incompetence - 2015 Reviewed

As we bid 2015 farewell, I'd like to review some of the more irritating stories of 2015 because that makes me feel better.  Somehow it's the ointment that soothes the swelling of my discontent.  These are in no particular order, so just see them as all equally irritating in my eyes.

Donald Trump-  I have written a couple of blogs regarding "the Donald" and I even had a letter published criticizing him to the local bugle,  "The Orlando Sentinel".  My feelings are a little more lenient as I've gotten use to his antics and I see him as less "concerning" and more as an "opportunistic egomaniac" who knows how to use the press.  He's also a smart businessman, and this is all just business to him.  As much as I don't want him to be President, I do see the appeal in his humor and his success in the business world.  We've let the lawyers and bureaucrats run the show for so long, I sincerely don't see how he could do any worse.  As for all his statements that "alarm" the press and the left.... nearly all of these are impossible for him to do - he knows it and the press knows it but it gets him attention and it gets the press "eyeballs" and that's all either of them really cares about.  If  his fans really believe he can do these things he promises then they need to crack open their 8th grade civics book.  I say that with the caveat that all politicians do the same thing, but Trump is a lot more clever about it.   He lies like all of them, but he just lies BIGGER .   Used car salesmen promise "it's the best value"  but  Donald Trump  is the only one with the nerve to promise it will also fly.


Climate Change (or whatever you want to call it) -   This is such a political "hot potato" but in my humble opinion, it should not be.  If the scientists say it's a problem then I certainly don't have the knowledge to argue with them.  Why would they lie ?  Are they all Democrats ?   And, if I might add... assuming they are correct then it's everybody's problem not just the Democrats.  The controversy really lies more in the solution than the actual problem.  The Republicans have allowed the Democrats to steal this one right from under their noses with the notion that the only way to fix it is through the government.  The conservatives need to start offering solutions to this problem and not keep trying to deny it's even a problem    Remember, this is our planet - our children and grandchildren will be the ones who pay if we don't get this right.  The right needs to get their head out of their ass and propose free enterprise solutions to a real problem.  All problems have the  highest potential to be solved from both the government and free enterprise.--that is--when both act in concert.  It's not that complicated.

ISIS/ISIL/Daesh/Nazis/ Scum -  Please can we at least come to an agreement on what to call them ?  This group of murderers is getting so much attention and often it seems there is a desire in the media to blame someone.  Was it Bush for invading Iraq ?  Was it Obama's fault for withdrawing form Iraq?  Was it Obama for not stepping in when it started looking bad in Syria several years ago ?  Is it Europe's fault for being spineless cowards in the face of such a nearby threat ?   Is it the moderate Muslims for not expressing enough outrage ?  Is it our fault for provoking extremist Muslims ?    In my humble opinion, it's all of the above but MOSTLY it's the fault of ISIS themselves.  They are the ones "doing" it after all.   Now, let's coordinate with the non-murdering world to remove these scum from power.

National Debt-  It's now nearly $19,000,000,000,000- That's Trillions.  The Demcorats?  In my mind this is the left version of "Global Warming".  They have their heads up their ass as they seem to think it's absolutely no problem - even offering all kinds of new goodies to hand out such as free college education.  It is a total outrage that this is such an ignored issue by the left.   I promise you though that they will pay attention when  our nation veers towards bankruptcy but then, as with Global Warming,  it may be too late.

The Political Parties-  Today we are looking at Donald Trump and Hillary Clinton as the most probably options for the general election.  Do I really need so say anything else regarding both groups and their total failure to the American people?


Posted by Marshall in the Middle at 2:35 PM No comments: Links to this post