The Lowdown on US Census and Citizenship Controversy
By Chuck Marshall 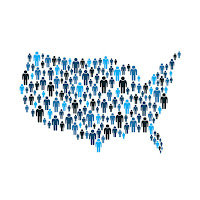 What's all the fuss ?

Each state is represented according to the population of its citizenry.  US citizenship is required by law to vote in Federal elections.  The census is proposing the question of how many actual citizens - that can vote -  are there in each dwelling ?  The left goes apoplectic.  Why ?  Because the Dems know they will lose representation in Congress due to the enormous numbers of foreign immigrants in Democratic states such as New York and California.  The more people you have, the more representation you get in Congress and that could tip the power from one party to the other.

How does this affect the individual ?

The individual American citizen should consider that their power as an individual diminishes if non-citizens are allowed to be counted.  This goes for anyone who votes, whether it be R's, D's, Libertarians or Independents.

This argument was made back before the civil war when the south and north compromised and made slaves 3/5 of a person in regards to representation.   The south wanted them to be counted totally, the north "not at all" for obvious reasons.  There's power in numbers, even if some of those numbers are humans treated as cattle.

Absolutely the question should be asked.  Representation is to reflect voting citizens and nothing else so it stands to reason that non-citizens, who cannot vote legally, would not be counted for the purpose of representation.  In addition, this goes down as one issue for the Convention of the States to add as a voting rights act for any new amendments to the constitution.

Posted by Marshall in the Middle at 8:05 AM