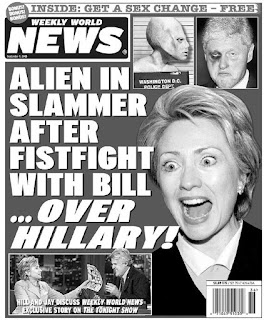 I Call them JINA !

I've always loved the screaming headlines you see in the tabloids and since most  media outlets are now not any different from the tabloids (I call them  JINA-Journalists in Name Only) then I think they need help from Chuck Marshall, also not a real journalist !  We are brothers and sisters in our amateurism !   Since these so called journalists are for entertainment  I thought I'd  draw up some screaming headlines !  A  gesture of good will  from Marshall in the Middle to "save them the trouble" so to speak !  Notice I'm using exclamation points in many of my sentences !  That's the most important part !  It's always the end of the world !

As I suggest headlines, often there are many alternatives for the "subheading" I think they call it... the short sentence after the headline explaining a little more to get the reader's interest.  Since there are many ideas, I have several choices.  To make it fun, you can make comments on this blog as to your favorite !  Then I'll know there are real people actually reading this blog !

Regarding the latest theory that Putin and Trump are still colluding and have gone so far as to set up the chemical attack on children in Syria;

"Trump Colludes with Putin to Wipe Out Baby Seal Population!"

1)  Nothing is more important right now, leaders agree in clandestine conversation !
2)  "Their cuteness irritates me" Putin insists while Trump goes along since they're "besties" !
3)   Putin hopes to feed them to his pet tigers !


So today we have headline A and B.  Choose the headline and the sub-heading in the comments section, ie;  A1 would be you like the headline "Putin Moves Into White House, Living in Basement!" the most and you prefer the subheading "Master puppeteer orders immediate missile attack through Donald Trump- On Russia!".

In fact, feel  free to suggest other headlines and maybe I'll include them in my next blog !   In fact I thought of another for Putin in the basement "Is mastermind behind Trump Tweets!"

Your journalist in earnest, Chuck Marshall


Posted by Marshall in the Middle at 7:27 AM