Trump Junior Guilty..... of Being Naive 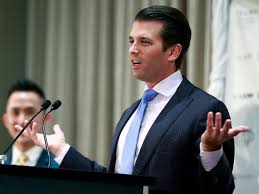 
So, Donald Trump Jr. met with a Russian lawyer who had promised damning information on Hillary Clinton.  He met with the lady and allegedly abandoned the meeting because he came to  realize the lady had nothing to say or offer.   In the emails which he released to the press it is obvious he looked forward to the meeting and hoped to gain the upper edge for his "then candidate" father, Donald J. Trump.  I'm not going to bore the reader with the dreary details of a completely insubstantial  meeting.  I do, however,  want to try to extract good information and perhaps some logic out of the latest hysterical media rampage.

1)  Trump Jr. met with a Russian but the Trump campaign had previously denied any sort of clandestine meetings with any Russians.  He lied.

3)  It is not a crime to listen to gossip from a foreign government about your political enemy.

4)  If there was "collusion" then let the investigation committee find it and I'll be all ears.  So far, I still  smell "nothing burger".

5)  I'm more interested in what the DNC was doing in Kiev, Ukraine with foreign operatives in a distinct effort to undermine a political opponent of theirs;  Donald J. Trump.   I believe that IS illegal.  I'm  also curious about some of the mysterious deaths associated with the Clintons that I used to brush off as partisan bunk., but there's certainly enough there to be intrigued.  The MSM is curiously uninterested.  Why?    Now that, would be an interesting story.

6)  The Republican party is a bunch of insider DC weenies who watch with barely a whimper as Trump is accused over and over of things that we all know Obama, Clinton and the DNC did.  They are a very flaccid group and only the Democratic party sports a more shrunken organ.

7)  I'm not real crazy about Donald Trump but I absolutely loathe hypocrisy much more.  I'm willing to give the old bastard a chance to achieve my fantasy- drain the swap of greed and avarice that is Washington, DC.  I've  never seen a person truly capable of doing it until now.  The obnoxious., belligerent,  politically incorrect, plain talking, straight shooting, clever, scheming, tweeting and conniving Donald J. Trump.  Sick 'em Don !

8)  Donald Trump won and the left would be wise if they let this whole thing blow over and just try to work with the man.  I don't think it will end well for them if they keep this up.