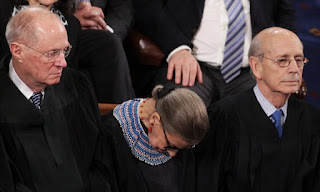 It is frustrating to me that we watch as members of our media, our entertainment,  our sports teams, and even members of our wonderful government start ringing alarms regarding a situation that is currently in the news and they reveal how much they don't understand their own government.   Put in another way;  The don't know what the fuc* they're talking about OR if they do they are misleading the public on purpose to stir the pot.  Most likely, it's both.  They know they're lying, they just don't know exactly in what way.

The best current example of this is the selection Judge Kavanaugh to replace Justice Kennedy as one of the sitting nine justices of the supreme court.  He was selected by President Trump for this life-long (unfortunately for all of us)  position early this summer.  This will give the conservatives a clear majority for rulings at the highest level of  our judiciary.  The left wing of our nation has gone apoplectic thinking Roe VS Wade will be overturned and so they have turned the entire occasion into a bizarre "blast to the past" of early 80's house parties with horny, drunken teenagers.  I am not commenting on what was done because I was not there and like the rest of the world,  I have no idea.  That's why we have courts and law enforcement to sort it all out.  Today it's all all a matter of  "he said- she said" absurdity drummed up by the Democrats and the media to block Republican  progress and to increase the ratings for their, flat, unintelligent analysis trotted out every evening by dimwitted, "talking heads".

I can comment on something that the media rarely brings up.  The reality of the situation and why both parties, as usual, are a detriment to our country and they are useless bags of hot air intent on helping  nobody with the very big exception of themselves.

A)  Overturning Roe VS Wade is highly unlikely, and Kavanaugh just like Gorsich before him  (also appointed by Trump last year)  has commented that he would not consider overturning Roe Vs Wade, (the Supreme court ruling from the early 70's that made abortion legal, or at least "not illegal").  The prevailing opinion, even in conservative circles, is that abortion is the "law of the land".  The exception could be limits on when the abortion occurs and that would be left up to the states.  So, for 99.9% of the population nothing is likely to change at all even if the entire court is conservative.

B)   The bigger problem is that we're in this situation at all where the supreme court justice is seen as so important to the course of our nation.  The courts should not and were never meant to have so much power that they can create law by simply declaring something one way or another.  Congress, aka the legislative branch of the US government WRITES the laws, The President ENFORCES the laws, the Courts INTERPRET the laws.  That's how it is supposed to be.  Nowhere is it said or written that the courts can also be used as a weapon to enhance any political philosophy.  But here we are.

C) Keeping justices for life is an unfortunate detail of our government that IMHO does harm to the Republic.  The idea of "lifetime" when this was written into law was that man was expected to live to be in his 50's.   Anything over 80 would have been laughable due to the unlikelihood and the humor of seeing such an old person with such power.  It would have been compared to the lunacy of various kings and queens that populated Europe at the time.  Today of course, it's more common than not to live into your 80's.  We see the consequences of one party holding onto power through the courts in the picture above.  This, as many aspects of our government, has become a joke.

Mostly I blame  Congress for it's never ending partisan politics and shocking inability to get anything done with the glaring exception of spending our money.  If Congress did its job, it would be less likely either party would look to the courts to "get their way".  But this is how it has all evolved to today, 2018,  or should I say "has not evolved".

Posted by Marshall in the Middle at 7:35 AM