Fidel Castro's Death Reveals A Lot in the USA 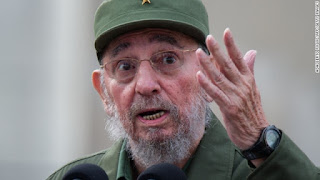 After a bruising year of elections here in the United States,  the death of Fidel Castro somehow seems to clarify the state of American politics and media here in 2016.  It's like putting on new reading glasses and marveling at how clear a page seems now.

First I must confess a personal slant.  I am  more acquainted with Cuba than most Americans being a Floridian with its massive population of Cuban-Americans.  Also, my wife is Cuban-American.  I've heard many stories of  Fidel Castro that most Americans might not have heard before.  My wife's family left after waiting many years to emigrate to the  US.  Her family left with not much more than the shirts on their back.  They left an apartment, furniture, personal photos, books, friends, and the comfort of what's familiar.  They didn't sell it to leave, they had to leave it all for the government to confiscate.    Their desire to leave Cuba was a well kept secret lest their neighbors scorn them.  My wife would have to sneak into church.   There was no Christmas.  There was no Easter.  Religious freedom was nonexistent.   All human individuality was removed from society for the good of the state.  It is a historical fact that Fidel had many innocent people executed for refusing to bow to his power.  Usually it was by firing squad.  Many people vanished into the night.  People drowned in the ocean by the thousands because they were so desperate to leave Cuba.  It was and still is a hell hole of Communist dictatorship with absolutely no human rights, freedoms or liberties.

Keep all that in mind as you can imagine my wife and her family watching as President Obama extended his condolences to the "family of Fidel Castro" and mentions that "history will judge Fidel Castro".  There was no mention of his brutal dictatorship or the millions of Cubans displaced and oppressed for the last 60 years.   Why did he not mention it?    I can only suppose because President Obama admired Fidel's accomplishments at  "redistribution of wealth".   I can also only assume that President Obama along with the leftist media secretly admired his ability to silence all of those who don't think like him.  He silenced contrary thought., and they yearn for such an ability.   They are the "thought police" (as in George Orwell's novel 1984)  without the power to enforce their ambitions and Fidel Castro was their patron saint.  It is a sad day for them.

This is all very revealing as Trump condemns Fidel Castro as a dead tyrant who brutalized his people while Obama offers condolences to the Castro family and looks to history to "judge" Castro.  Many people are concerned with  Donald Trump becoming a dictator of some sort, but in reality we've been living on the edge of a communist regime for 8 years now.   If not for a Republican congress and Senate, we very well could have been  there now as the liberals and Barack Obama would slowly choke our liberty and freedom of thought  quietly and "oh so very eloquently" into submission.  Let history judge ?  I think it's safe to go ahead and judge right now, Mr. President,  and I'm thinking it's already safe to judge you too.

Posted by Marshall in the Middle at 2:26 PM