President Obama's State of the Union 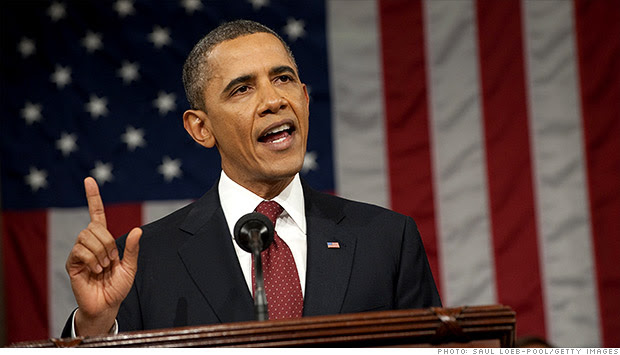 I'm watching the President's state of the union and feel perhaps it would be interesting to comment as he speaks.

A guy from Duck Dynasty is in the audience as an esteemed guest of some Republican leader.  - Not starting out too good here..... Rome is falling folks, and the Barbarians have infiltrated.

So far, he has elaborated on the recovery and that the strength of America is it's citizens.  -I'll drink to that.

Wants to extend benefits to families out of work.  -No big surprise, here.

Commenting on Michelle and her partnership with schools and fat kids.  -Good for her.

"People are tired of partisan politics."  -You think?

"End Tax Loopholes", "Remove incentives for corporations to send jobs overseas", "Reduce corporate taxes". - I've heard this one before.  Who can argue against it?  But we have an incompetent government that can't do anything for the good of the citizens, only for the good of their party.

Spend more government money so we can have another Google and more smart phone like products.  -I'm not sure those ideas came about purely due to government research 'nor that they would have never happened without the government.  That's a stretch.

"America's Energy independence has increased". - He has absolutely nothing to do with that.  This fact is a result of natural gas and new methods of extracting fossil fuels from the ground here in North America.

Wants to increase use of natural gas in cars.  -Okaaaaay., didn't he say that before?  I want flying cars too, but I don't expect my desire to cause their appearance.

Wants to help clean energy and hurt fossil fuels.  - So, do it !  He's been saying this for 5 years.

We have to work harder to stop climate change.  "Climate change is a fact, the debate is over".  Amen, brother.

Fix immigration.  -The one thing he could actually affect in his last years as Prez.  Good Luck.

So far, his speech is sort of flat, lacks a lot of passion.   Keeps stumbling over words.  Surprising, but the media will say it was "brilliant".

More examples of specific Americans that have "risen above it all".  -Good for them but this song and dance is really getting sort of boring.

Access to Pre-School-  I actually agree with this bit of government action.  Kids under 5 should still be in school learning, it's their chance to keep up with each other and not be sitting at home watching TV.  It makes a lot of sense.  Also, my wife is a pre-school teacher.  :)

Wage difference between men and women.  -I'm not convinced this is always due to an unfair work environment.  Let the market take care of this inequality.  Government should not be involved in this decision, except perhaps for government jobs.  The details and paperwork and effort to "force" business to make everyone "equal" sounds like a "red tape" nightmare and it has all the makings of another government boondoggle waste of our money.

Health Care.  -Here we go.  Some humor., always good.  Challenging the Republicans to come up with a better plan than Obamacare.  As I've said before  in this blog, I'm not convinced of Obamacare but I sure haven't heard any good ideas to fix the mess from the Republicans.  Time will tell.

Stop gun violence like that in Sandyhook. -  Something needs to be done., the NRA has way too much power.

Wars are over.  -Amen to that, but region is far from stable.  Nothing to brag about here in my mind.

I can't stand how Biden is always nodding his head.  "Shut up, Joe"

Boehner has not cried yet.

"No more open ended conflicts, America cannot be in constant war stance" -  More preventative action.  Sounds good, but can it be done?

"America will always be at the side of Israel".  -the obligatory pro-Israel stance that all American presidents must make.  Perfunctory.

America is a special place. - Yes it is.

Personal story of an Army ranger "Cory" wounded by a roadside bomb, Prez had met him before he was seriously injured- Can't go wrong with stories like that.  Masterful ending with a war hero.

Posted by Marshall in the Middle at 10:36 PM No comments:

I wrote another letter to the Orlando Sentinel and, again, they published  it.  At least I know these words are getting a large audience as compared to this blog which is still such an elusive fulfillment !  The Orlando Sentinel has a circulation of several hundred thousand and I also noticed the Chicago Tribune picked up my comments on the electronic version of that esteemed paper.  That does my ego some good !  This letter was not directly related to politics but it does skirt around it as a subtle criticism of naked greed that has become so commonplace in all of our society.  I also posted this in my other blog  "Journal of an American Malcontent".
Anyway, here is the letter for anyone interested, and I expect to post something less oblique and more directly political very soon.   Let's face it, the politics has been kind of boring lately.  ( Here is a link to "Journal of an American Malcontent" in which I make some other "wry"  observations and better explain the issue regarding Red Lobster, its parent company "Darden" and their sudden obligation to satisfy an investment group that gobbled up a chunk of their shares
(http://journalofanamericanmalcontent.blogspot.com/  )

I hope you all enjoy my brief take on the decline of the American corporation.

Regarding the investment groups encouraging the spinning off of Red Lobster and Olive Garden for Darden.  I have no doubt that the stock price of Darden will go up due to these strategies for the company (whichever maneuver they choose), but I wonder then what will be the purpose of Darden itself?  Do they exist to simply make money and become more "valuable" on the NYSE?  Many American corporations have declined to the point of operating at the direction of finance wizards with their "leverages", "buyouts", "spinoffs" and they have forgotten why it is they're in business.   If I may be so bold as to suggest to Darden;  pay attention to what you're serving the public and how you treat your employees and ignore the yammering of financiers.  Ultimately the value of your stock will go up even more because you're offer something the public wants.  Isn't that what it's all about ?

In My Humble Opinion.
Posted by Marshall in the Middle at 11:12 PM No comments: