Today there was a lot of play time in the media regarding Ben Carson's surge past Donald Trump in a key national poll.  Donald Trump was quick to express his confusion and said on several occasions that he "didn't get it".   What doesn't he get ?  Haven't his "handlers"explained how polls work?  I suppose he's being rhetorical but something in his voice is truly confused by all this.  The egomaniac is getting a dose of reality.  I have already written my opinion of Trump in this blog a couple of months ago.  In case you missed it, here it is from August 5th, 2015 titled "The Donald and Hillary";  "Our country has truly dropped to a new low with these two as the front runners to be President.   Donald Trump is a wind- bag egomaniac with not one ounce of class.  He calls his opponents names and gives out their phone numbers to the public.  It's like watching a mob boss run for President.  He runs his mouth about what he's going to do with no explanation of how he'll do it.  The only thing I've agreed with that has come out of his mouth was the comment he made on O'Reilly that our country is in trouble and on the decline.  He is living evidence of that fact."

Now, here we are over 2 months later and the Republican party still struggles to find a potential candidate  to replace the "community organizer" we have in the White House right now.  The fact that Trump is still way ahead in the polls truly frightens me and is evidence that the frustration in the country is much worse than I thought.  On the other hand,  it's good because there's a chance the American people will wake up and start paying attention to what our leaders are doing or "not doing" (as is usually the case).  It's easy to imagine that  "The Donald" as president would certainly NOT be boring and he would most assuredly DO something., I'm just convinced the bulk of it would be BAD things.  How can commerce and prosperity flourish when we're  all on edge regarding what outrageous comment will come out of the president's mouth next ?  Will he get us in a war today?

If nothing else, Obama is boring but safe and steady.   The college professor wouldn't dream of getting into something so serious that he could feel compelled to stand up and ask something of us.  His ringing oratory is strictly for ideals and theories.   The Donald would not only not speak to us but would probably speak AT us and I'm afraid we'd all eventually be "fired" in his mind because we don't "get him" and his brilliance.   His egomania is disturbingly similar to tyrants throughout history. He's truly confused and baffled by criticism and reacts with exaggerated venom often referring to critics by name calling.   A potential President, Really ?    You don't "get it" Donald ?   Again, I agree with you.  You definitely don't get it.  You don't get the American people and you never will and I am hoping that the "rank and file" of the  Republican party is starting to see that too. 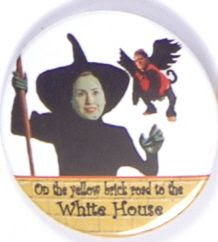 
In my last blog I elaborated on the witch hunt for Ben Carson and how the media attacks and interrogates him for standing up for his principles.  Sometimes a "witch hunt" actually catches a real witch.  Case in point;  Hillary Clinton.   Today she is testifying to the Congressional committee regarding Benghazi.   Exactly what did she know or not know on Sept. 11, 2012 when our ambassador and 3 other Americans were killed ?   Was the White House playing politics with the truth when they claimed it was a video that instigated a mob to attack our embassy when it was actually an organized terrorist attack?   A terrorist attack would have been highly uncomfortable for a sitting President up for reelection so they clearly tried to hide the truth.     What it comes down to is whether she was negligent in protecting our people in Libya AND whether she and the President played politics regarding the details.  I think it goes without saying that they played politics., they're politicians !    Without her coming out and announcing what was true,   I don't see Hillary admitting to anything,  So, they chase the witch but are almost assuredly going to find only a ghost that will slowly vanish before the nation's eyes.  She won't admit to anything and the left is unconcerned with the details as long as their guy...er "gal" gets the White House.

Hillary is extremely adept at dodging questions.  She is not an honest person and she never will be.   In addition, and in true partisan fashion the Democrats on the committee are openly defending her position against the Republicans.  Never mind the truth here !  This is the Democratic party's likely choice for the presidency and they will watch her lie her way to the White House rather than stand up for the truth,.  Once again, the division in government is glaring but typical.   The Republicans are asking the tough questions and the Democrats are eager to dismiss the entire thing as, er... partisan politics !   Would the Republicans do the same thing if the situation was reversed ?  During the Nixon hearings there was no partisan politics coming from the right wing as they asked tough questions of all involved with Watergate.  Today I doubt that would be the case.   If  George W. Bush was being questioned under similar circumstances the Democrats would ask the tough questions and the Republicans would gloss over any obvious lies or incompetence (since we're talking about W.Bush !).

We are a divided nation, and for the political parties the truth and competence and what is right for the American people are all very secondary issues.   This witch will not be burned at the stake.  Far from it.  Her lies and deceit will be ignored and defended so we can take one more step away from a morale country to a country that rings the bells of mendacity in the name of  getting the prize for "our side".  The losers, ever more frequently, are the American people.

Posted by Marshall in the Middle at 2:53 PM No comments:

Keeping the Black Man Down

I've been fascinated and disgusted by the media and its reaction to Ben Carson.  The "second place in the polls" Republican candidate has been the object of great ridicule by the media (with the exception of Fox, of course).  Chris Matthews referred to him as "disgusting" for a comment he made about fighting back a mass killer.  "Disgusting"?    An Ivy league professor referred to him as a "coon".  GQ had a headline "FUC* YOU BEN CARSON", apparently outraged that he had the audacity to speak his opinion without being ultra careful about his "politically correct" speech patterns.   With Ben Carson, they are so very quick to scrutinize !  The left leaning media are the "thought police" of our day.  (I don't mean that Fox and the conservative media are innocent, but I'll leave that for another day to rant about).

Why don't they pay attention to the issues at hand and the candidate's experience and ideas for our country?    Always, they come up with "if this happened, what would you do?" questions to try and trap people with comments that don't suit their agenda.   The only exception to this rule is regarding Mr. President Obama who can say and do practically anything but they don't dare question his motives or leadership abilities lest they be labeled a "racist" by their fellow "thought police" in other news organizations.  Such courtesy is not extended to Ben Carson who is black,  but he's not the black they need him to be.... a black man who will agree with all of their worldviews.  What's worst of all ?  He's a devout Christian who refers to creationism as more than just a "fantasy" that they have decided that it is.  In a nutshell, he doesn't think like they do.  Bad !

So, they stir the pot.  Once again, they have turned it all into an "us vs them" issue  where everything must be condensed into a left vs right issue.  It is this static philosophy that is holding us down.  They are suppose to be scrutinizing everyone in government and questioning all candidates about what they are going to do to fix the problems of modern America.  What has this to do with the majority of their questioning?   What's more curious, is how can they ask Ben Carson very tough "gotcha" questions and leave Donald Trump essentially unquestioned.  The Donald has made far more outrageous declarations in the last months.  Shipping all illegal immigrants by rounding them up and loading them up on  trains "a la" Nazi Germany?   I hear barely a whimper from the left.  Why?  Because he's white and all that is to be expected.  He fits their narrative perfectly.  No need to question him, let his egomania speak for itself.  Besides, he's so entertaining !

After watching Wolf Blitzer interrogate, I mean interview Ben Carson on Sunday I have come to a conclusion about the mainstream media.  They are highly bigoted.  They are bigoted against any person of color who has the nerve to be conservative.  They are bigoted against any minority who does not subscribe to their "victim" mentality that "big brother" wants them to take.  You see, if someone you speak up for and defend in your every day conversation starts taking the side of what you see as the problem  (In this case, white conservatives) then you begin foaming at the mouth.

Their narrative goes something like this;
"How dare this "non-white" person take any philosophy other than that we, the media, have already concluded ?   The white MALE conservative is the evil one and pointing the finger at anyone else  (least of all yourself,) is highly forbidden.  Personal responsibility?  "Bullshi*!"  The white MALE has been putting you down for all these centuries and it's only us..... the mostly white media who can help you up.  Not yourself !"

They believe that only the government can atone for all the outrages against people of color for the past 500 years.  They  concluded long ago, that  each individual African American, Latin American, Native American is not capable of taking care of him or herself.   You see, with this passive aggressive "you need our help" philosophy  they continue to put down people of color.  There is a complete and total lack of respect towards the abilities of the minority population.   Ben Carson makes them fear that maybe they aren't the superior ones after all.


Posted by Marshall in the Middle at 8:53 AM No comments: