"Vaccine" Passports and Other Orwellian Concepts 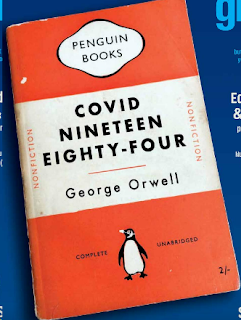 I wrote a blog on the vaccine back in the spring when it was still in its infancy as a topic of our current historic times that I refer to as the "Age of Incompetence" (or "L'age De l'incompetence in French because everything sounds better in French).  That was the blog where I introduced the concept of "Mad King George".   MKG is simply an easier way of listing out the usual culprits behind the weirdness of the lying mass media and our gargantuan  government beholden to the large corporations and foreign countries.  This group includes Hollywood and their orgy of self-importance and all manner of modern "virtue signaling" that lays blame for all failure on anyone who succeeds (this includes anyone going back to the beginning of human history).   Above all, of course, it's the dingbat political parties and their never-ending war and refusal to compromise on anything other than national holidays or on how many trillions of our dollars  they will be spending this month.  Mad King George.  But really,  "Mad King George" is a label I came up with because of my interest in history and our revolution that established Liberty as an essential part of being human.  In retrospect, I think Big Brother fits the bill better with regard to ideas like the vaccine passports, etc.. Big Brother has more the sense of the ruling class watching us and making our decisions for us "for the common good".  Mad King George may be too nice for this group.

So, anyway I wanted to address the vaccine news to be more current because it has gotten even dumber than when I wrote the first blog so I need to "update the stupidity" as it were.

1)  NYC has restricted citizens from eating in restaurants or working out in gyms unless they can prove they've been vaccinated. The good news, I guess,  is that restaurants and gyms are open at all !

2)  President Biden has demanded that all US Companies with more than 100 employees require all their employees get vaccinated or be terminated.  "My body, my choice"  does not apply to so called "vaccines" but does apply to unborn children.  It gets confusing if you think about it, so Big Brother would prefer you not think about it.

4)  If you did not know,  you should be aware that the Pharmaceutical companies that produce the "vaccines" are not liable if something should go wrong with the "vaccines".  That, coupled with the fact that the "vaccine" has NOT been approved by the FDA except in cases of an "emergency" turns this vaccine into history's largest experiment with the human population all while the entire world is watching.    It's "probably Okay", they tell us.  All this at the great urgency of left leaning government leaders and their cheerleaders in the mainstream media.

5)  If you decide you don't want to get the vaccine because you are concerned about the risks of getting it you're out of luck.  The government and all the ruling class have deemed it essential you take the vaccine or millions will die because of your thoughtlessness.  But, I thought the vaccine was to prevent them from dying ?  There I go again, thinking it through.  Sorry Big Brother !

In conclusion, the meaning of liberty is to be able to make decisions for yourself and your family that you feel are best for you given your beliefs, concerns while weighing the risks of taking the action or not taking the action.  That's Democracy.  That's the people making the decision.   The chance of getting on an airplane and catching COVID19 from another passenger and then dying are 1 in 60,000.  The chances of dying in a car accident in your lifetime are 1 in 115.  I understand putting on a seat belt, but I don't get forcing the entire world's population to take a "vaccine" that is unproven, that won't actually prevent you from getting the virus for something that is less dangerous than driving in a car on any given day.  The chances you or I will get cancer in our lifetime are 1 in 7.   One in 60,000 VS 1 in 7.  That's a statistic worth paying attention to.  Our lifestyle decisions to prevent cancer are significantly more important than all the rabble about this vaccine.  But, at the end of the day, that doesn't get headlines 'nor fatten the pockets of pharmaceuticals, 'nor give our government and media another chance to instruct us on how to live our lives.  It gives them no control over us and so is therefor, of no interest.

Posted by Marshall in the Middle at 8:57 AM No comments: 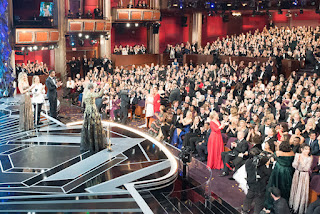 I took a break from this blog for a few months to rest my weary brain and get my blood pressure under control.  Not to mention  I've been very busy at work !  Plants are in fashion "BIG TIME", thanks in large part to the CORONA Virus, COVID virus, Wuhan Virus, Chinese Virus, etc....  Folks stayed at home and got busy planting  and adoring plants.  They bought a lot of plants.  I mean a lot !  I mean we have a new kitchen and two new cars "a lot".  Good year for me  but I am sincerely sorry for all the tragedy of death and sickness.  Hopefully my industry helped a lot of people get through it with the joy of growing and tending to houseplants and yards.  I see plants as frozen testament to God's creativity and love for this planet, they are God's canvas and their colors and behavior are his brushstrokes.

During my time off I actually got the COVID virus, and I did indeed live to tell about it because here I am writing my thoughts for all the world to see once again.  Here I am available to irritate and bloviate on modern times and its inane talking heads- in government, big business, entertainment/media- although really the three are inseparable.   Like the trinity God-Head, they are separate but the same.   "Mad King George" as I have taken to refer to the ruling class and all their minions that really "run things" in America and the world.  I do refer to them as MKG with some hesitation because I don't think King George III was nearly as bad as they are.  No, they are especially fetid group of human seepage that lie, cheat, steal, and vomit out a life of disgusting self congratulations.  They rob us of our  our liberty under the auspice of  "emergencies" and "for our protection" when it's really the protection of their money and their power that most concerns them.  They lay out a list of pitiful victims that they purposely demean so as to remove any sense of pride under the premise that someone else is always to blame.   This, when in reality it is they themselves- our opinion leaders- that are the culprit of defeat and the source of abject racism and sexism through this very act of psychological brainwashing !    "The poor minority folk can't make due so we have to help them out" they say.  Where would the world be without the white liberal "progressives" helping out the pathetic ?  But, don't expect them to actually DO anything to fix it !  No,  they are just there to celebrate victimhood and get a charge out of their own concern and their great willingness to give away other people's money.  Say whatever it takes to get the vote.   Such Hypocrisy !  "Woe to the scribes and pharisees!!" as the Lord put it.  The world's leaders today (in all aspects of modern society) are a loathsome group of toads that have outdone all horrendous leaders in history for their avarice and lack of concern for anyone but themselves and their fellow cronies.  Their ingratiating "concern" for the downtrodden.  Their patronizing gifts to help out the miserable.  Their self aggrandizing solutions to problems they themselves helped create.  Their charity with OUR blood, sweat and tears.  Oh for the days of the guillotine !

In My Humble Opinion....

Posted by Marshall in the Middle at 10:43 PM No comments: