Marco Rubio concludes: "Man not cause of Global Warming" 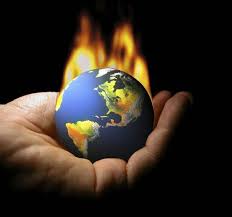 Our esteemed Senator here in Florida, one of the main contenders for the Republican nomination to the White House has declared he does not believe mankind is responsible for Global Warming.  I have written on this subject a few times in this blog but I felt compelled to "giver it another crack"  after reading the article on his comments this morning.

I like Marco Rubio  for a lot of reasons;    He's very intelligent, he's quick witted, he's well spoken, he's a self-made man and I agree with his stance on fiscal responsibility.  He even had the nerve to stand up to the "lame brained" Tea Party by not joining them and their "do nothing" approach to the problem with immigration.  He's easy on the eyes too, although I'm not attracted to men, it makes it easier to watch and listen to a leader if he's not pug ugly.   He even shares the same Cuban heritage as the love of my life, my wife.....but.... (Yes, you knew a "but" was coming). But... I think he's making a mistake to climb on board with the "global warming is a conspiracy" fruit loops that lurk around the far right of the Republican party.

I don't blame a person who "has doubts" that global warming is caused by mankind.  I don't even think the most studied climatologists are 100% convinced., however you have to look at the "chance" and "probability" that this is the case.  Probability is a topic we all studied in middle to High School and if you passed the class you know that there are rarely any absolutes here in our reality.  So, I conclude in my disappointment regarding Marco Rubio's pandering to the "fruit loop" right;   "Global Warming is PROBABLY caused by mankind and given the circumstances for our children and their children that is enough for me to conclude we need to do EVERYTHING we can to stop and/or  reverse the damage done by our modern society even if it's not economically expedient to do so".

IN MY HUMBLE OPINION
Posted by Marshall in the Middle at 10:45 PM No comments: