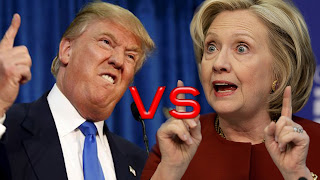 I thought the debate last night was a pretty big snooze.  It was very predictable, with two liars going back and forth about what they will "attempt" to do to steer our country straight.  Glaringly, neither one mentioned Congress which is the source of the government's incompetence this past 10 to 20 years.  With all due respect to Donald Trump's very accurate statement that "she's all talk and no action", so is he.  He just doesn't know it yet.  How will he manage our massive federal government with the vast majority of the key players already disliking him ?    Running the government is not running a business, and although I wish him all the luck in the world to fix it., I don't think he can.  His ideas are grounded in the theory that you can always declare bankruptcy when things go wrong because that's good business using the "laws of the land" as he explained in the debate.   Unfortunately the country can't declare bankruptcy and make all the bad stuff go away.  It's not an option Mr. Trump.   Hillary ?  Hillary is a living, talking, breathing example of everything that is wrong with the federal government right now.  All talk and government goodies,  "We're here to help" and ideas that would make our government even BIGGER.   God help us.   Also, something is wrong with her physically that will come out sooner or later.   She walks gingerly,  like an 85 year old not a 69 year old.  But don't expect this information to come from any news source because they don't really give us information anymore,  only their opinion.  What happened to journalism ?  Why aren't they doing their job ?  They avoid searching for the truth because they're afraid of what they'll find.   No we won't hear it from them we'll have to find this out by someone's camera phone watching her stumble or have an obvious seizure.  This is a very sad situation we have right now with these two fighting it out and the media munching on popcorn as they watch and opine.

In my humble opinion....

Posted by Marshall in the Middle at 8:42 AM No comments:

I'm Sure She'll be frank about it though...Ha Ha.

After watching the fallout from Hillary's pneumonia diagnosis, I just had to sit down and  jot out a quick blog.   It turns out that my refusal to watch Cable News for a few months actually helped freshen my mind a little and "re-set" my approach to the whole political process.  Seeing what occurred yesterday opened my eyes to what I didn't recognize before;  they are even worse journalists than I had previously thought.   If I wasn't already aware that the mainstream tends to the left I would have seriously considered that this was news produced by high school students unfamiliar with logical thought and rational conclusion.   Hillary Clinton announced (er, her "handlers" announced which we all know is her because nobody "handles" Hillary) on Sunday morning that she had to leave a 9-11 memorial service in NY early due to heat exhaustion.  OK.  It happens.  Then,  a video goes viral on Twitter showing Hillary stumbling as she got into  her limousine.  Not only did she stumble, she looked as if she was having some sort of seizure.  It wasn't a normal "fainting"spell, folks.  That was obvious.   So, I'm watching all this wondering how CNN was going to present this to the American people.  In my mind it was sort of a test.  Will they be effective journalists or will  they fall into the same old cliche, fawning over their next "historic" President ?

If  Hillary has something serious it could tip the election in the direction of  Valdemore...., er....Donald Trump and that's just unacceptable to the mainstream media.  They didn't choose him !  (actually,  Fox did, but that's another blog altogether)   How did they present it ?  They totally ignored it.  Not one peep on CNN regarding the video going viral on Twitter.  Unfortunately for them and their favorite candidate,  Fox was covering it very, very thoroughly and anyone with a Twitter account could see the video.   We're no longer at the mercy of their whim as to what's news and what's not.  I watched as the so called journalist "talking heads"  drew up all kinds of excuses for Hillary's heat exhaustion.  It WAS hot  in Manhattan today, they explained and all this was perfectly understandable.  I simply couldn't believe my ears.  If she had heat exhaustion then that can be dangerous, why didn't they rush her to the hospital instead of Chelsea Clinton's apartment ?    Why did they not show the video as a tool to investigate the next President of the United States (they certainly use them when it's  cops getting too rough with minorities) ?    Why am  I asking questions  in my head that my news source is not asking ?   That's their job !  I was so mad I broke my own rule and posted something political on Facebook.  This is what I said

"So....I'm trying to avoid politics on fb, but Hillary said today she had heat stroke at the 9-11 ceremony in NY but on Friday she was told she had pneumonia. So, she lied....again.....or am I not understanding this ?"

I got some blow back but in the end, even her supporters on FB could not claim her as an honest person.  Absurd, and more than 80% of the media is NOT doing its job.  The Orlando Sentinel ran a story from the LA Times today that practically praised Hillary for not lying about it longer than she would normally, in other words for Hillary,  "not lying" is news.    I may end up voting for Donald Trump just because I know how much they all don't want him.  Seeing their body language while that happens would be priceless.

So there you have it loyal readers., my take on the latest commotion in this wacky election year.  Don't forget to click an ad and share this blog on Twitter or FB or whatever... because, after all "Everyone is Entitled to Chuck Marshall's Humble Opinion".


Posted by Marshall in the Middle at 9:59 PM No comments: