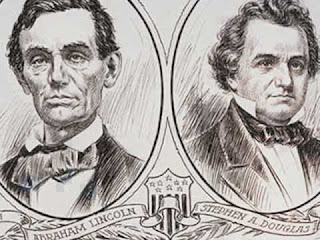 I posted again on FB today my humble opinion regarding politics.  I cannot help myself.  I'm a zebra with stripes.  A cheetah with spots.  A frog with a ribbit.  I am what I am.  Anyway,  what was my "beef" today ?  I can't stand the idea that I have friends on FB that have actually blocked my posts or would potentially de-friend me if I uttered a political comment to the contrary of their own opinion.  It's just so immature and dimwitted and really, at the end of the day.. boring  !  Why shy away from debate- aren't people curious why some people think the way they do ?  I love hearing opinions, even if they aren't my own.  My problem is when an opinion or category of opinions is muzzled.  It tells me the people doing the muzzling are up to no good because they cannot debate.  They have no answer but to shut you up.  That's not what our country is about.  We will NEVER solve our problems until we start listening to each other.

The Mainstream or corporate media is the most guilty of this.  They want to control the thoughts of people not listen to other ideas.  Why don't they see that the concept of hearing opinions equally and fairly debated is actually quite interesting AND can be entertaining !  Maybe even more entertaining than hating Donald Trump !

Anyway, here's what I said;

"I am very vocal with my opinion because that's just who I am. I care about every FB friend I have but I often wonder about people not willing to hear other opinions. I know some people have un-friended me and blocked me for disagreeing with them and for expressing an opinion "too far to the right" or horror of horrors- defending Prez Trump. To those people that defriend people for their opinions I want you to know that I feel sorry for you for living such a shallow, narrow minded, uninteresting life in an echo chamber. This is a free country, if you want controlled thought then move to China, Venezuela, Cuba or North Korea. In those countries there's never a contrary thought because if it comes up that thought goes to prison along with the human thinking it."

In My Humble Opinion !

Posted by Marshall in the Middle at 10:38 AM No comments:

Mad King George- The Tyrants Among Us

I had a post on Facebook that I left up for a few hours but decided it was too political to leave up. It is not too political for this blog though ! It was in response to a "friend" demonizing Fox News for "ruining" America. So, here it is;

"To all of you that hate Fox...the solitary voice of conservative thought on the national scene ! I rarely watch news anymore but I have found it a comfort that Fox is there with an opinion that leans conservative & not in agreement with the rest of them. Diversity of thought. .Corporate media control the thoughts of the public that watch them & are puppets of international conglomerates. They broadcast opinions of the left because it's far easier to control a left leaning government that feels entitled to maneuver the laws in their favor according to the wishes of corporate lobbyists. Disney bought Fox & it's slowly shoving it towards the left. Eventually it could be to your liking but any voice in favor of free thought & small controlled government on the national scene will be lost. Such ideas are a threat to those at the top of our society, in government, corporate, etc... You think you're supporting the little guy by cheering on mainstream journalists but it's actually quite the opposite. Liberties enshrined in the constitution could become vulnerable to shrill, hysterical, mob rule of the far left. Freedoms that even you consider important will be in danger of obliteration by a despotic government. Muzzle the voice of opposing views with great care. Eventually, it will be you who's muzzled."

In several earlier blogs,  I labeled the idea of a Deep State or the "powers that be" as "Mad King George" because they are so much like the crazy king of England that managed to lose America due to his reckless thrusts at demonstrating power and refusal to see reason.  Our King George is a motley crew of career politicians,  corporate lobbyists, virtue signalling executives, a tyrannical media (that does the thinking for a lot of dimwitted people),  Hollywood superstars/executives cooped in their mansions with bodyguards and a sack full of obsequious bullshit,  and an academic/scientific community that feels it has now taken the place of God.   I don't believe in any conspiracy because to do so would imply something intelligent is going on.  It's not intelligent, it's just tyranny doing what it does- silencing the opposition and imposing its ideas on all of us  whether we want it or not.   All in the name of equality and "fairness".   They impose their will on the American people.  This is a very dangerous thing to do.

Posted by Marshall in the Middle at 8:51 AM 1 comment: