The Age of Incompetence: Election Recounts 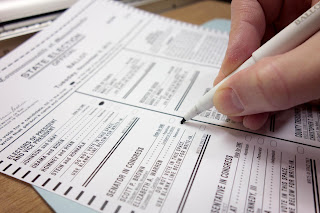 Here in Florida we have an official recount going on for three candidates from the midterms.  The Agriculture Secretary, the Governor and the Senator.  I'm not going to get into too much detail about who the players are or what the problems are at the moment because it's such a predictable bore.   Just keep in mind this is a consequence of our two party system where we have grown adults acting like 4 year old children and the incompetence of most anything the government does is glaringly obvious.

In reference to my last blog regarding the fact that some people should just NOT VOTE., I have to point out that one of the issues includes re-counting the ballots where the person who did the "filling out" didn't follow instructions.  For example, they mark an x instead of filling in the bubble so the machine cannot read the ballot.  If I filled out a standardized test in grammar school  or a final in college where I marked and X instead of bubbling in the proper answer then I would have missed the question because I didn't follow instructions.   If you can't follow instructions properly - given that there are all manner of volunteer "helpers" there to instruct you on the complications of bubbling in a ballot-  then you should not be voting.  That's the hard, cold reality of life  as an adult.  If you don't follow instructions then you "got it wrong" and consequently  you lose money, you lose the job, you don't get what you want.  We all must deal with this harsh reality--  try again next year !  Because of these "instruction challenged people" here we sit as our "so called" leaders squabble over how to recount people's wrong answers !   What a colossal waste of everyone's time and energy because people can't bubble in a ballot.  As always, incompetence thrives in our times.

Who benefits ?  The media conglomerates with their nauseating and hysterical breakdown of the current "controversy",  a feast of incompetence for the incompetent and their viewers..... In My Humble Opinion.


Posted by Marshall in the Middle at 9:01 AM No comments:

The Age of Incompetence - Election 2018

For the longest time I've marveled at how much people are encouraged to vote.  "Get out and vote" is the rally cry for both political parties because they know how important it is to their success.  I use to see these ads of encouragement as a fine thing getting people to exercise their right.  Everyone is entitled  to vote and should vote, no matter  what.  Right ?  Well, as I ponder our incompetent government- which has been  elected by the people for generations- I can't help but wonder if that's part of the problem.  Ignorant people are voting.  You see,  if you don't know what you're talking about or understand how the government works then you shouldn't vote.  All you're doing is muddying the waters and encouraging the outrageous lunacy we've witnessed this past few years.

Political candidates know this and so they promise everything under the sun.  That goes especially for their base of "mouth breathing" extremists.  I marvel at how much presidential candidates blather on about "what they're going to do" but none of the media calls them out, ie, "how will you get that done if  Congress is controlled by the opposite party"?  Details, details.

I watch as reporters ask "people on the street" questions as simple as "who was President during the American Civil War?" and they get it wrong.  These are the creatures voting for the morons that run our government and spend our money.   I don't mean to discourage voting for any specific group of people except the idiots.   You, idiot,  are the very reason nothing gets done by our leaders and our nation is $21 Trillion in debt !   Twenty one Trillion dollars and counting because we keep electing  political parties that have no intention of fixing anything.  When they're not in power they have the nerve to bring up the national deficit as if the issue is suddenly important to them !    If you don't know basic history, basic civics and the basics of the problems our country faces  then don't vote, stay home, and get high.   That is the first step to stepping past this "Age of Incompetence" we suffer through.  Do it for your country !

Posted by Marshall in the Middle at 9:27 AM No comments: