Confederate Heroes Should Have Never Had Statues To Begin With 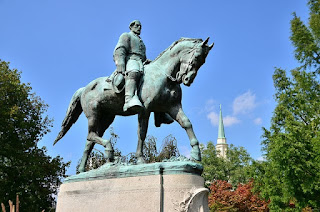 I am a student of WWII, maybe a bit of a WWII nerd, and I know something of the Nazis. The Nazis affected my outlook on life so much that I doubted the existence of God for several years because their deeds in history were so barbaric. So I say, with hesitation but bolstered with an urgency to stand up for what's right. it is my understanding that most of the protesters in Charlottesville were protesting the removal of a confederate memorial.  This is not a Nazi monument and in most pictures  I see confederate flags not swastikas.  These people did have a permit to protest and although many of them no doubt have offensive and disturbing ideas about race,  they had a permit to protest as they did and even had the ACLU defending them in court to get the permit.  Can you get any more liberal than the ACLU?   The violence was started by counter protesters that DID NOT have a permit and they provoked the right wingers with violence.   Hopefully I don't have  to say this didn't justify running over those poor people and killing the one young lady.  The President is blaming BOTH sides for the unfortunate events of this past week. He's only stating a fact of the matter, and as blunt and bombastic as he is with the media, I think he's right.

As for the monuments themselves ?  i have always been a little puzzled by Confederate statues.  Didn't they lose the war ?  Why did the US allow confederate statues after such a horribly bloody war ?  I think the north was anxious to get past the war and move on, so they decided not to step in to stop any aggrandizement of the Confederate  heroes  lest they provoke the south.  I can understand it, but in a way they dragged the whole thing out and it might have been wiser to not allow anything other than memorials to the war dead.  This would have allowed for a place of honor for all those families that surely were grieving.  I think looking back it would have been better to have never allowed them to be erected  at all under the auspice they were leaders of a traitorous rebellion against the country.  Of course the south would have gotten huffy over the restriction  but they would have gotten over it.  General Lee himself is known to have been opposed to any statue or tribute to him and expressed a preference that the nation move past the painful Civil War.  Today we have to deal with the issue and understand there are a lot of people who still feel strongly about their southern heritage and see the Confederacy as a stand against an oppressive federal government.  The process needs to be sensitive so that we can, in consensus, finally get the Civil War behind us and move forward together as a united country.


Posted by Marshall in the Middle at 12:47 AM No comments:

Email ThisBlogThis!Share to TwitterShare to FacebookShare to Pinterest
Labels: Confederate

Global Hunger Down Substantially Since 2000

Am I the only person that reads the newspaper or watches the news and hears encouraging statistics only to have the reporter add a "but" at the end of the good news ?  Why can't they give us good news and then shut up ?    Since the MSM is so determined to direct our attention to "the Sky is Falling" mentality., the marketer in me has decided perhaps it would be worth it to start pointing out some of the good going on in the world and allowing the reader to enjoy the fact.  These little articles I  headline "Democracy Thrives in Brightness" as an homage to the Washington Post's fatalistic tag line "Democracy Dies in Darkness".  I realize their "sky is falling" mentality brings in ratings, but maybe there's a market for mare positive news that at least pauses to offer a taste of the good news being offered.

Did you know that the worlds' rate of hunger has dropped 27% since the year 2000 according to the Global Hunger Index (a statistical tool used to describe the state of countries’ hunger situation). The  world's population is getting larger and larger which is cause for concern, but the reality is there are well over a billion and a half more people added to the planet since 2000 and they are much less miserable than just 17 years ago !  The rate  of hunger has gone down by more than 50% in China, Brazil, Peru and Bolivia.

Why is the world hunger rate going down ?  There are multiple factors.  Better farming practises throughout the world.  More open and Democratic societies which encourage business and commerce.  A larger rate of capitalism throughout the world fosters entrepreneurship and a higher flow of cash in society that leads to more food produced.  .
This is good news,   Let's stop to celebrate and enjoy the comforting thought that far fewer of our fellow humans are going without food today.

Posted by Marshall in the Middle at 12:00 AM No comments: