In a previous blog I referred to the Ukranian-Russian conflict as none of our business but as is often the case... time has revealed a clarity that I think justifies far more severe sanctions against Russia and more accurately against Putin.  This guy is pouring gasoline on the internal affairs of the sovereign state that is Ukraine by supplying weapons and firing guns from within Russia itself.  Also, when the rebels  responsible for shooting down  a commercial airliner (probably a mistake, but so what?)  then have the audacity to prevent investigators from even going into the crash site...... then international outrage is warranted.  Nearly 300 innocent people are now dead because of Russian meddling.  Their determination that somehow that is defensible boggles the mind.  This is the consequence of a dictator whipping up nationalism within his own borders, nothing else.  He is no Hitler or Stalin (right now), but still he is a dictator because a tyrant always murders the innocents with little regard for humanity or common decency.  It is him, his ego, and the mongoloid sheep that follow him with blind faith in his "bo-peep" nationalism.  Picture the multitudes of Germans frothing at the mouth over the words of the maniac Adolf Hitler as he led their country straight over a cliff.

What a disappointment as I had felt for years that Russia had finally joined the rest of the world by wedding democracy.  When I was a kid they were always the bad guys, then they evolved in the 90's to a form of democracy and freedom that had been unthinkable to me as a youth.  Now, the Russian bear has awaken from its sleep and found the need to bludgeon Goldilocks Russia and her new found porridge of liberty.  The Russian need for control and order that comes with totalitarianism proved irresistible, I guess.  The Russian people are certainly within their right to embrace whatever form of leadership they want,  no matter how repulsive,  but when that leader sucker punches a neighbor struggling to steady its own boat of prosperity.... that's a problem.

So, as is often the case in the face of a common enemy., this week the two parties exercised a rare and elusive bi-partisan agreement.  They agreed that strong sanctions against an enemy of liberty must be enacted.  If only they could do this for the good of our nation in regards to the significant problems our country faces today such as health care, illegal immigration, and the national debt.  To them the porridge is always the too cold or too hot according to the bowl the "other side" is holding.    In domestic affairs it is the parties themselves that are the enemies of liberty.


In My Humble Opinion

Posted by Marshall in the Middle at 10:02 PM No comments:

I'm afraid that I'm falling into the apathy that is running rampant and is so contagious in our society.  I'm starting to "not care" about things. It's all so frustrating and seemingly hopeless.  I see no light at the end of the tunnel but a lot of darkness lurking in our future as our leaders continue to bicker with no offers to lead us but plenty of reasons to vaunt their own cause, to puff up their own party.  Their way of seeing things.

The alternate domination of one faction over another, sharpened by the spirit of revenge natural to party dissension, which in different ages and countries has perpetrated the most horrid enormities, is itself a frightful despotism. But this leads at length to a more formal and permanent despotism. The disorders and miseries which result gradually incline the minds of men to seek security and repose in the absolute power of an individual, and sooner or later the chief of some prevailing faction, more able or more fortunate than his competitors, turns this disposition to the purposes of his own elevation on the ruins of public liberty.

"on the ruins of public liberty....".  How excellent is that., and how true though there is not obvious despot today (Obama, perhaps the "despot of incompetence"- but he's more a victim than a perpetrator),  in my humble opinion the parties themselves are despots in group form and they are assuredly dancing on the ruins of public liberty though with great irony many of them believe themselves the saviors of liberty.

I was thinking today that the Republican and Democratic leaders are traitors.  They are traitors to us all for their abject failure to lead and come to decisions for the betterment of our nation.  Whether it's Iraq, or Iran or illegal immigration or health care, or take your pick... there is no impetus to improve., only to point the finger.

We were once the example to the world.  Since WWII our country had been the "de facto" leadership of the world.  We haven't always demonstrated a lot of wisdom, and we've surely made a lot mistakes but I think we've always showed the world how a government should be run for the betterment of all its people.  I was proud of the leadership in Washington, DC.  No more.  This hasn't been true in a long time and it's  hard to care when we're lead by a posse of traitors.  So, I feel apathy for the news I read lately.  Who cares.  It's more of the same thing.  Nothing gets done but a lot of posturing.  Nothing gets done.  Traitors.

And I close with another excerpt from President Washington., brilliant and wise words regarding the political parties and their position in our government;

From his farewell address- 1796 in New York

“However [political parties] may now and then answer popular ends, they are likely in the course of time and things, to become potent engines, by which cunning, ambitious, and unprincipled men will be enabled to subvert the power of the people and to usurp for themselves the reins of government, destroying afterwards the very engines which have lifted them to unjust dominion.” 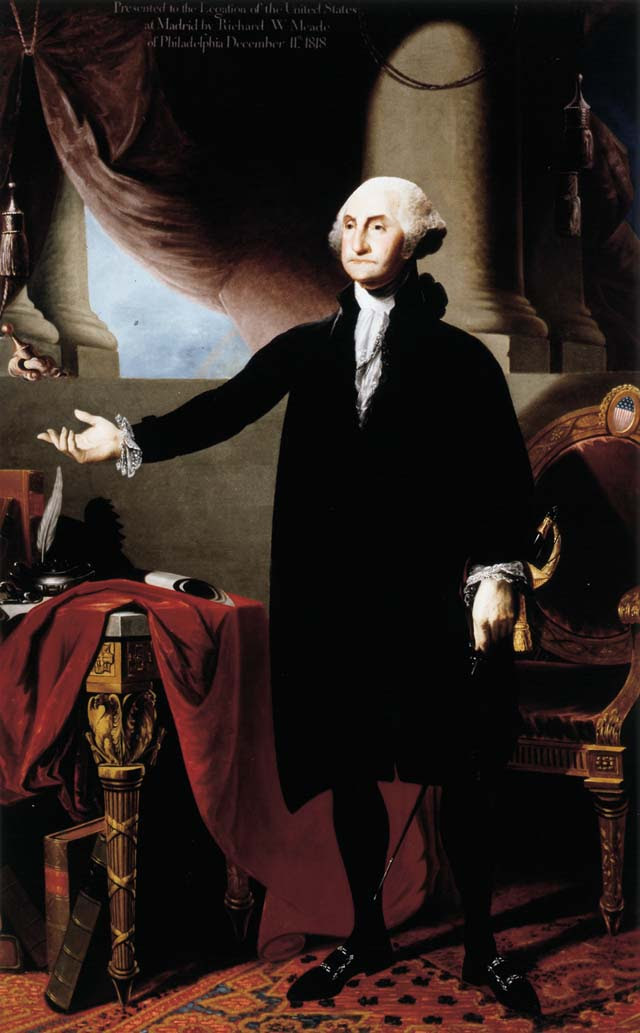 Posted by Marshall in the Middle at 10:29 PM No comments: