We Deserve Better Than This 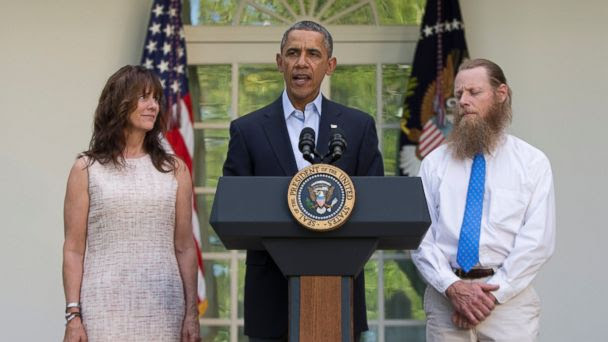 I've been watching the situation with Sgt. Bowe Bergdahl these days and there sure is a lot of controversy over his departure from the Army.  Should it be an honorable discharge  or dishonorable discharge ?  Should he be handed a check for $300k in lost wages or should he be cut off from any government aid for the rest of his life ?  Should he be convicted of desertion?  This is a decision I am glad I would not have to make,  On the one hand you're rewarding him for deserting his post (which nobody disputes is what he did).  He put his platoon in danger looking for him when he deserted.  On the other hand, the guy has been through so much, shouldn't we just forgive his misjudgment and let bygones be bygones.... give him his honorable discharge and be done with it?   I don't have  the answer to this question, but this is a decision for the military courtroom not public opinion.

With any situation like this, we have to learn something.  I've concluded that our President is not a good negotiator.   Why would you trade 5 Taliban fighters for a soldier that deserted his post?  Why would you bring him home and parade his parents  through the rose garden and have your National Security Advisor trumpet him as a "man of distinction" when he's nothing of the sort?   I see the entire thing as  a charade.  This was a "safe" call for Obama because it was a low- risk negotiation and he thought he'd come out looking great for saving one of our soldiers.  It was worth it to him to give away more than he got because he needed the headlines as he hearkened back to the days of capturing and killing Osama Bin Laden.  He forgot, once again, that he is  not a King and that most thinking people would openly critique his tactics.  These are the actions of an inexperienced executive.  I don't see that he has learned much in his 6 years as President.  He hasn't learned to negotiate with our enemies and I'm concerned that this very much includes Iran.  He also hasn't learned to negotiate with  Congress which has cost all of us dearly as the legislative branch of our government has been totally inept and ineffective.  This is part of the job of the President to not just negotiate with Congress but to also lead them to some extent with common goals.  How often has Obama spoken directly to the American people to encourage us or to lead us or to embolden us to speak to our Congressmen about any given situation?   He makes a great speech, but ringing oratory is not the solitary distinction of a great leader.

So that's what we have today.  A poor negotiator who is not developed much past  his days as a community organizer.  We see the leadership vacancy in all three branches of government, but most especially in the White House.  This has cost us dearly.   I've said it before and I'll say it again; Barack Obama is not qualified to be President of the United States.  We must come up with a better process of selecting our leaders.  We deserve better than this.


In My Humble Opinion.

Posted by Marshall in the Middle at 11:57 PM No comments: 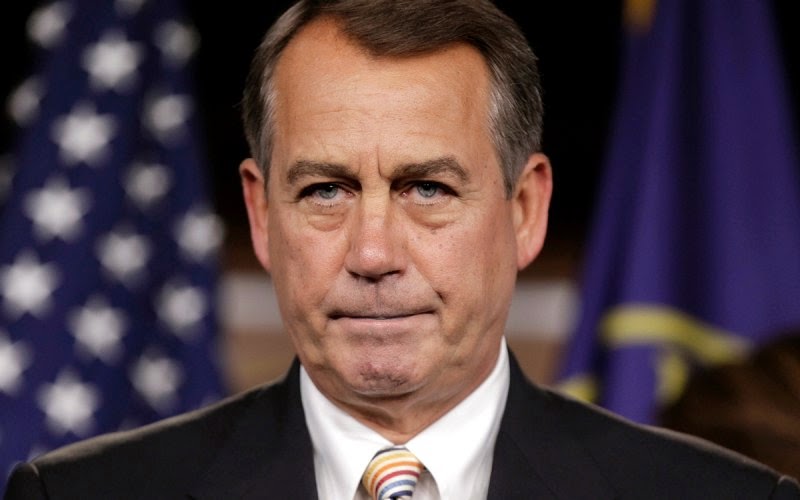 As is common in this blog I have to come out and criticize either party for their lack of ideas and solutions.  I do sometimes wonder  if good ideas elude them  because it doesn't behoove them to have ideas.   Recently the Republicans had a stand off with the Democrats and President Obama's "Immigration Reform" which they believe to be "overreaching".  In agreement with them, Obama himself explained many times in the last several years that he would not issue an executive order regarding immigration reform because that would have to come from the legislative branch of government.    But I don't understand 'nor has it been clarified to me what it  is the Republican right wing wishes to do ?  Do they really want to ship all these illegals right back to their home countries?

Instead of proposing a reasonable plan to fix the situation and perhaps offer up legislation that might be agreeable to the President, the GOP decides to try and turn this in to another "anti-Obama" issue and  proceeds to  nearly force a closure of the department of Homeland Security.  Speaker of the House "Boehner" very wisely took the high road and made peace with the Democrats in order to broker a deal that the President wouldn't veto.  Still, they push the country's safety to the edge over their ridiculous partisan political games.    A wise Republican  led congress would see the opportunity to offer other solutions that would help to solve the problem of illegal immigration and leave the legalities of what President Obama has done to the courts.  That's what courts do, folks.

This is what you get when you load up the government with expert "politicians" not leaders.  Slick lawyers and future lobbyists who are very skilled at making themselves look good during campaigns but they are not good  at leading our country and offering solutions to  very real problems.  Their solution is to do something "anti-Obama" because they can ring that bell in the next round of elections soothing the anger of their constituents and thus securing themselves another term in Congress, and perhaps even more importantly,  securing themselves a "juicy plumb" of a job on K street as a seven figure lobbyist.

In my humble opinion.....
Posted by Marshall in the Middle at 7:38 AM No comments: