Pigs At The Trough 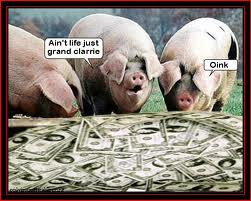 Did you know that the amount of money spent on lobbying in Washington, DC has gone up by seven times since 1980..... seven times ! The amount spent on organized "influencing" of our federal government is at an astounding $3.4 Billion annually as of 2010 ! That's up from $1.44 Billion just since 1990. Nearly triple in 20 years.

So, who are these lobbyists, exactly ?

Well, I could go on and on about who is buying our government but I think I'm making myself clear that this is out of control.   This has been one of the hardest blogs for me to write because I tend to acknowledge both sides of arguments, but I see no argument to support such obscene amounts of money being spent by the monied and powerful.  They steer our government to make specific decisions that would obviously be in their favor.

In "Common Sense", Thomas Paine began by writing:  "Perhaps the sentiments contained in the following pages, are not yet sufficiently fashionable to procure them general favor; a long habit of not thinking a thing wrong, gives it a superficial appearance of being right". Thomas Paine was talking about the King of England,  I think it applies today to the lobbying industry.  We've seen it so long, that it seems like an ordinary way of "doing government business".  An unfortunate necessity.   But,  what's going on is wrong.   Like slithering snakes, these lobbyists have coiled themselves around the very freedoms and liberties our young men and women fight for over seas, choking those freedoms into submission in the name of corporate welfare.  These people have an undue influence on our government  and its operation.  I am afraid that our leaders in Washington, DC consider, first and foremost,  "what would be the best course of action to grease the palms of those that will get me reelected?".  Any benefit to the American people would be a happy circumstance..... a pleasant coincidence.  With lobbyists whispering in their ear, the focus and targets and ambitions of our leaders is rooted in the matter of how they might yield more power to the already powerful.

Chuck Marshall
Posted by Marshall in the Middle at 10:30 PM