President Carter a Ray of Hope for Dems 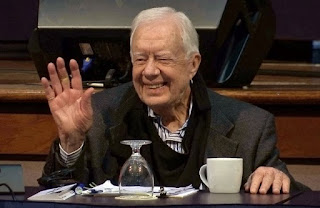 In case you missed it President Carter came out with some surprising comments.  I would say shocking but they didn't shock me because I've been saying the same thing for months now.  It's so refreshing to hear a leading Democrat speak without mendacity, I'd almost forgotten that it's even possible.  And all from a 93 year old former president whose life was just snatched from the jaws of death with a new cancer treatment that he volunteered to trial.

I was never a big fan of President Carter, but Lordy, Lordy is he better than Hillary Clinton, Chuck Schumer or Nancy Pelosi.... the three stooges of the Democratic party.  His honesty was always there, and it's so nice to hear again after all these years, a throwback from before our insanely partisan times.

A quick review of his comments;

“I think the media have been harder on Trump than any other president certainly that I’ve known about,”

“I don’t think there’s any evidence that what the Russians did changed enough votes, or any votes.”

"Carter told Emory University students that the “pressures and the publicity that Trump has brought to the immigration issue” could even yield comprehensive immigration law changes that Presidents George W. Bush and Barack Obama could not muster."

He added that Trump’s critics, including himself, “have to give him credit when he does some things that are not as bad” as they are depicted.

One of my favorites referring to the Clinton Foundation in comparison to his charity organization;  “Rosie and I put money in the Carter Center. We never take any out”

Posted by Marshall in the Middle at 8:03 AM