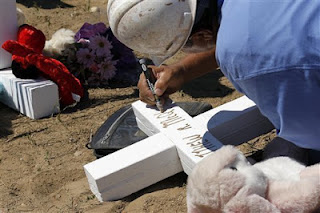 After viewing the news regarding the creature that killed the movie-goers in Colorado this past Friday morning, I have felt compelled to throw something up  (so to speak)  on my blog regarding the murders.  First and foremost to anyone who might have known or even been related to the citizens that were taken from us,  I must offer my most sincere thoughts and prayers to you and your loss.  Let none of my comments diminish my most sincere feelings of outrage at this dark void created in your lives by this demonic, barbaric troll.

When things like this happen we all want to know "how could this have happened?".  It reminds me of an old Woody Allen movie where one of the main characters mentions watching a documentary on the Holocaust, the character states;

I know this doesn't demonstrate much of a positive outlook towards our fellow man, but I do think there is some truth to it.  First;  We live in a world of entertainment where violence is a huge portion of what is consumed by the population.  Second, There are a lot of people out there who are not totally in contact with reality (for whatever reason).  Third, We live in a country that makes it very easy to get whatever weapons you might want (with all due respect to licensing.....  that's like using an iron shield to prevent a Howitzer from firing).   I think but for the grace of God we have been very fortunate.   It is a bit of a wonder it doesn't happen more often.

Since this is a political blog, I must start by predicting what our beloved leaders will do to drag this whole situation into the usual partisan political boxing match.   The Democrats will demand more control of guns and restrictions for public gatherings so that somehow their rules and regulations will make it all better for us and we can sit comfortably in their fabricated world of secrurity and chain link fences.   Safe and secure from the crazies.  As usual they feel if they can control the situation it will eliminate the problem.  The Republicans will bend over to the National Rifleman's Association and conclude all restrictions of concealed weapons should be abolished so that we can all protect ourselves.... the wild west back again !  As usual, they feel if they can empower the individual while simultaneously boosting the bottom line of their favorite lobbyists......then what's the problem?  Keep in mind I'm not saying these things will happen, I'm saying if either side had complete control of the government they would happen.  (Mercifully, they do not).  As long as the two parties run the show, nothing will ever get done to prevent another calamity because they don't cooperate on anything.  This is the one "definite" here.

What would an intelligent, wise government do under such a circumstance?  Since none has really ever existed (as my series;  Intelligent Government;  An Oxymoron?" has been elaborating on... stay tuned loyal readers !)  I can only hypothesize.  First, an intelligent government would remove the incentive for any person to do such a thing as what was done in Colorado.   The murderer is after notoriety so..... remove the fame.  All investigation of the person should be restricted from public observation.  No media information other than the victims and details of what happened., there should be nothing of the person who did it.  That should be true all the way to the day they die.  Don't give him what he wants.  Refer to him (or her) only as "Mass Murderer Number XYZ" No nicknames (The Boston Strangler !), no titles ("John Wilkes Booth"- as if he's now to have his name announced rather than spoken), none of that subtle celebration of the butcher..... just  "Mass Murderer # 5897", nothing to be proud of as he sits in his 10' X 10' cell for the rest of his life.  Second, make the punishment fit the crime.  Since he loves guns so much that's all the reading material he would get;  nothing but guns he'll never be able to use.   Any other reading material would be only information regarding the people they murdered., their lives, their families, their hopes and aspirations, their journals, pictures and anything the immediate family would like to say to the murderer regarding their loved one.  Third, no death penalty.  Life in prison.   These people aren't afraid to die, they're afraid to live.  Make them live with the guilt for the rest of their lives.  Let the guilt eat away at them as each day passes consuming their every day thoughts like a cancer on their soul.  A diseased, blackened soul with no cure but for perhaps true remorse and repentance that only God could see or forgive.

Wouldn't it be great  if we could stop enabling perpetrators with thoughts of attention, and glory and notoriety.  Let's make them think about the probable punishment and consequences to their actions.  Then maybe it won't be worth it anymore to any of these freaks that imagine themselves the "Joker" or history making assassins.  Give them reason to keep it all as just a fantasy in their twisted, small minds.

Posted by Marshall in the Middle at 5:10 PM