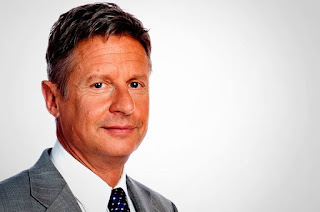 As I'm sure most of you know,  like the name of this blog indicates, I am a political moderate.  That does not mean I'm boring.   I would safely say the same for Gary Johnson.  The man has quite a life experience including climbing Mt. Everest,  and his even temper and tenacity make him an excellent choice for President.  His Libertarian ideas of fiscal conservatism and social liberalism bring him in synch with  most Americans way of thinking.  I believe his balanced approach to governing and his ability to bring the two political parties together to get things done make him the only logical choice this year.

I wrote a letter to the Orlando Sentinel today griping about the lack of media coverage for Gary., so as part of my endorsement I am including what I said to them.   This has been stirring in me for months, but I've been so busy criticizing the other two candidates I didn't do my homework and clarify why I prefer Gary Johnson.  That's "my bad" for sure., and shame on me for piling on the existing candidates.  But, part of  my reluctance has been that it just seems so hopeless for him, but it suddenly occurred to me that's always been the case with new ideas.   There is hope, and hope is a lot better than criticism, doubt, and divisiveness.

Over and over again in this election and in all elections we are served two dishes, the Republican dish and the Democratic dish.   The media, both print and cable continue to box us all in to the same old way of thinking.   Your endorsement last week and your  "letters to the editor" column that you had today was all about the two main candidates as if there is no other choice this year.  There is another person on the ballot named Gary Johnson, the Libertarian. I know he's not "polling well" but he IS another choice.  He's fiscally conservative and socially liberal which means he is a "moderate" to either party choice.   He speaks in full sentences.  He's not a product of our dysfunctional, corrupt and bloated federal government.   He served as governor of New Mexico for 8 years, so he has the exact experience to be a chief executive, unlike the other two candidates.   People say "he can't win", but the reason he "can't win" is nobody pays attention to what he says unless it's a mistake.  I've watched him in interviews and he's intelligent and fully capable.   His ideas are logical and would help steer our country to finally shake off the tyranny that is the dominant two-party political system.  Best of all, he's neither of the other two candidates.  So you see,  there is a choice, "none of the above" would be Gary Johnson.

I will note/edit this blog if they do print the above letter.

Posted by Marshall in the Middle at 8:07 AM