At least for the time being. 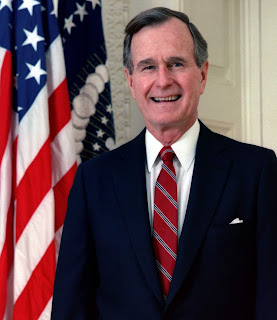 The sad news of President Bush senior passing away this past week has brought back memories to me.  I was in high school when George was running in the primaries against Reagan.  I supported Bush because I thought he had a better resume and seemed more moderate (of course - a moderate leaning American even in my days of youth !) .  Of course,  Reagan won because the country was anxious to get away from the near socialist government we lived under in the late 1970's and his folksy demeanor appealed more to middle America.   Then Reagan chose Bush as his VP and I was suddenly a Reagan fan.  Yes, at the start I liked Reagan because he chose Bush !

I voted for George Bush in his first election.  It seemed appropriate given the success of Ronald Reagan that his VP should take over his successful Presidency.  That was my thinking even though at the time he lacked the excitement of a great leader.  George, at that time, had become familiar to all Americans and looking back he had become taken for granted.  Maybe a little boring.  But he won.    Much in the news has been elaborating on the end of the Cold War and the Persian Gulf war that Bush presided over.  This is all history and I think his handling of both episodes was exactly what we needed at the time.  Calm, professional, patriotic, intelligent  and understated diplomacy.

In his second election against Bill Clinton I found Bush to have evolved into a bit of an arrogant and detached windbag.   At this time the Republican party began its departure from a moderate approach regarding protection of  the environment towards an openly hostile attitude regarding all things green.  "Tree huggers" became their scorn towards citizens like myself that think we're obligated to take care of the planet.  George HW Bush was no exception,  So, I voted for Bill Clinton.  This is the only time I ever voted for a Democrat running for the Presidency.

In the end, George Bush Sr. was a gift  to our country and mankind.  He was a brilliant diplomat who lead our country with great clarity and decency.   His accomplishment as a pilot in WWII is a remarkable story of  youthful courage.   His years after the presidency revealed a big heart for helping those who could not help themselves.  His friendship with ex- president Bill Clinton under the auspice of helping victims of natural disasters was a wonderful example of American exceptionalism.

Well done George HW Bush you were sincerely a fine human being and our country was very fortunate to have you as a leader.


Posted by Marshall in the Middle at 8:17 AM