To wear or not to wear a mask ?  It depends on who you ask of course, but in my humble opinion,  it depends on the situation. 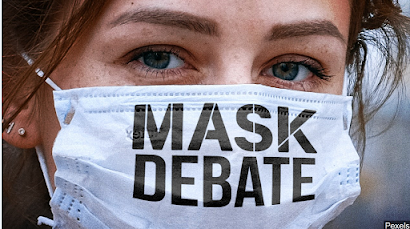 How the Left Looks at it:

The left sees wearing a mask as necessary to protect the innocent and to prevent the spread of this highly contagious virus.  They think anyone that does not wear a mask or demonstrates a lack of concern to wear a mask is not as human as they are.  These violators are defined as "not caring" what happens to other people.  This is usually their opinion of conservative ideas.  The mask itself is a highly symbolic example of them as a political group that has morphed into a hysterical mob of virtue signalling dilettantes (in as far as their understanding of REAL oppression) who have never seen a victim they didn't love, unless it's a white heterosexual man of course.   By all means, muzzle anyone that disagrees with their outrage.  They love to control other people and they demand we all react to their specific worries and sensibilities.  How dare you doubt their concerns ?

Their hysterics are fueled by the corporate media that is delighted with President Trump's falling ratings.  The fact that all this hurts Trump's chances of continuing as President gives the media great motivation to keep the "death tolls" running on their daily reports along with shrieking headlines about the "rampant spread" of this dangerous virus  (that has a less than one in a thousand chance of killing you - IF YOU CATCH IT-  for those younger than 40).  They even go so far as to exaggerate the rates of spread according to Red state VS Blue state.  Blue states good.  Red states bad.

How the Right Looks at it;
The right sees it as another example of their freedoms being taken away.  Twitter lights up ablaze with warnings that it will be your freedoms of religion and speech that are taken away next !  They warn these will be removed systematically as a consequence of this suspicious virus (in their mind) that interestingly comes from communist China, one of the least free countries in the world !   In addition, with the virus are connections to other suspicious characters such as Bill Gates who we all know is out to halt all reproduction in the world and make a trillion dollars on the vaccine.  (Sarcasm)
The right is once again, seen as anti science as they ridicule the ineffectiveness of the mask to prevent the spread - especially since Fauci said at the beginning of all this that a mask is ineffective.  He did change his mind,  after all !  (Of course he had his reasons for this pivot if you look into it).   They follow the back and forth over a drug the President claimed would stop the virus but has not been sanctioned by the scientific community- another example of the "deep state" looking to bring down Trump.  Conspiracy theories are never ending.  The right looks on in disgust as they see the left defining  "hate speech” and “racism” and “xenophobia”, their usual rallying cries and they twist themselves inside out to find the latest victim to advocate for existent or nonexistent oppression.   Always there is  a reason, in their minds, to keep conservatives quiet but now they can literally cover their mouths !

How Marshall in the Middle Looks at it;

At the end of the day;  Given the likely reality of more people getting sick if people do NOT wear their mask I don’t think it’s asking so much to wear them when around other people.   Demanding they be worn as soon as you walk outside is draconian, though.  Shutting down an economy is absolutely absurd.   I understand the concern from the left but I also understand the anger from the right.  Our ancestors came to this country in order to NOT be told what to do.  It’s in our blood.   You, those that demand we all see things the way you see them are the true oppressors.

Posted by Marshall in the Middle at 7:19 AM