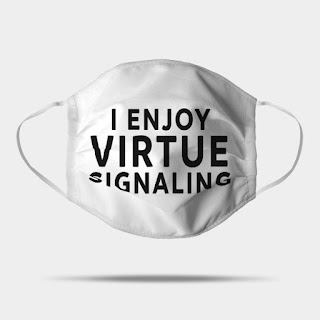 The Badge of Honor for Virtue Signaling Dilettantes
Here in the days of incompetence, (that seem unending with their recurrence of abundant stupidity as society grovels down to the lowest levels to make itself feel better about itself),  there is a common thread that ties the stupidity together in a nice, neat bow;  Victimhood.
Everywhere you go there are new victims to be coddled for the benefit of MKG (*Mad King George) to electrify the masses so that they should drop everything and change their lives and their minds to offer up themselves as being sympathetic to MKG's flavor of the month.  Virtue Signaling is the national fad.   Be it mask wearing, vaccine taking, climate change, gender identity, minorities, women, sexual preference,  pregnant women, unpregnant women, childless women, black women, latina women, asian women (and all their male counterparts but to a less extent),  atheists, Muslims, Buddhists, New Age Crystal worshipers, numerologists- and I could go on for a page or two.  All of  it needs attention and sympathy or you're a slime bag for not offering it up in full throttle support.   You're being anti "XYZ" !!!  "You're a racist! " The answer to help these poor pitiful victims, is of course,  within our marvelous Federal government (the crown jewel of MKG) and all its might and glory and trillions of dollars.  (never mind that these trillions don't actually exist- but that's for another blog)
Some aspects of these situations are really problems, but it becomes less important as the mob demands full support and any questions whatsoever are glared at as racist, homophobic, anti-science, anti-minority, etc....  You get the picture !  Any time questions are not permitted regarding a topic, then I know that's where the trouble lies.  MKG continues to grow in power and importance because he knows the vulnerabilities of the people and their tendency to want to fix a problem.   He also knows that virtue signaling is the easiest way to look as if he's exerting effort, even when he's not.   The Age of Incompetence dictates that any problem can only be fixed by MKG.  Any other options are not worth pursuing.  So don't even try.
The reality is that compromise and discussion and answering ALL questions and concerns of ALL the people is where the solutions lie.  It's not just the victims and their virtue signaling dilettantes that should hold the power of decisions and public discussion.  Attention must be paid to the questions, and often these questions are held by the majority of the people but they're afraid to ask for the tyranny of MKG.   The reality is ALL Americans are victims of an incompetent and useless government that has become incapable of leading or governing and is beholden to the powerful and moneyed and all Mad King George's minions in the media, Hollywood, academia, etc...
In My Humble Opinion.....
**Mad King George is my label for the ruling class.  This includes the federal government, the two party system of elections,  mainstream media, the political parties themselves, big corporate,  Hollywood, government lobbyists, and academia.   All the pigs at the trough, in other words.  Much like our forefathers fought off Mad King George and his pandering, tyrannical ways we can dream of removing the heads of these stuffed shirts, corporate elites, government bureaucrats and virtue signaling ass-wipes.
Posted by Marshall in the Middle at 9:16 PM