Is Donald Trump A Shill ? 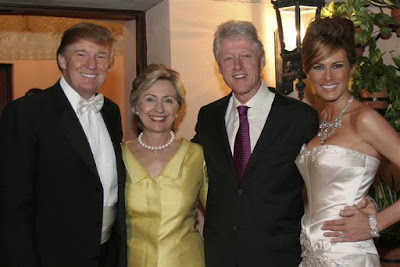 
Shill,/SHil/:  an accomplice; a person who helps and abets another for the purpose of manipulating the thoughts or actions of a third party.


Our favorite Chocolate Mousse Cake, Donald Trump is again being openly accused of being in the midst of some sort of conspiracy to purposely lose the Presidency for the benefit of Hillary Clinton.  Rep. Carlos Curbelo (R) of Florida publicly contemplated the possibility that "The Donald" is acting as a sort of "shill" and is purposely losing the presidential election in order to assist Hillary and perhaps the Democratic party to win back control of Washington, DC.   “I have no hard proof for my theory, but I think the relevant question is do people actually think that Donald Trump is trying to win?” Curbelo asked on the Fernand Amandi Radio Show.….“To all my passionate friends who are Trump supporters,” he continued. “And I understand why, there are a lot of people who are angry and frustrated in this country, they really don’t like Hillary Clinton for some obvious reasons — put together his recent conduct together with the fact he’s a close friend of the Clintons, they attended his wedding, the pictures are there to prove it. Donald Trump spoke to Bill Clinton three weeks before launching his campaign. I mean, again, I don’t have any hard proof, it may be nothing, but is this the conduct of someone who is trying to win? I just, I don’t see it.”

I mentioned this theory in my last blog "Donald Trump is Chocolate Mousse Cake", as a reference to my wife's suspicion which she has had since she was a Marco Rubio supporter back during the primaries.  I've always chuckled (no pun intended !) at the possibility as do most people.  BUT, why did Bill Clinton meet with Donald Trump 3 weeks before he declared his candidacy last year ?.  The Clintons HAVE been friends with "The Donald" for a long time.  The Trump family WAS in the Democratic party until just this past couple of years.

Hillary and Bill, the two most powerful Democrats meet with Donald and discuss a way for them to get into the White House with his help.  But it isn't money they want, they already have plenty of money from their charity "The Clinton Foundation" of which they are the main beneficiaries.  No, what they want from "The Donald" is his showmanship, his pizazz, his capacity to entertain the masses.  "Get into the race, Donald and throw a wrench in the works of the Republican party and we will reward you.  Not with money, but with enormous power.  Be our friend and you and your family will have front row seats at the most powerful address in the world.  At the same time we will be the "good guys" offering help and influence to "our old enemy, Donald Trump" who said such awful things about us during the elections, yet still we extend the olive branch."  Finally, bipartisanship in Washington, DC thanks to Hillary and Donald  !  There's nothing anyone in the Republican party could do about it.  They would have no choice but to work with President Hillary Clinton.

During the primaries it was "kind of" believable that Donald was winning because he was catering to the right wing of the Republican party and the frustration so many have with the lack of action on the part of our so called leaders.  Donald "tells it like it is"  which turns out to be the BIGGEST desire of the Tea Party wing of the Republican party (never mind the budget deficit, the constitution, or any realistic solutions to our nation's problems) so he was swept to the nomination for his "plain talk" and his monosyllabic sentences that they find easy to follow.  "That, I promise you".   Donald himself must be truly mystified that he is the nominee for a position he truly does NOT want.  Now, he has to lose the election to avoid getting the job he doesn't want and back into his garish penthouse in Manhattan.   How does he do that ?  He continues the same behavior in the general election as what worked in the primaries. Not because he thinks it will work., but because he knows it won't work.

Just a thought.  The idea of something so devious and crooked is hard to even imagine for most people, that's why it's shrugged off by decent people.  But we're not talking about decent people here.  We're talking about Hillary Clinton and Donald Trump - If there is ANY couple of people on earth willing and capable of doing such a devious thing it's these two.  "That, I promise you".

Posted by Marshall in the Middle at 10:55 PM