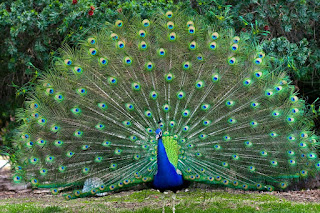 Here in Orlando there use to be a luxury Hotel that had a tradition of parading ducks through the lobby of the Hotel every day at 5PM, or something like that.  It was a big deal, and tourists would take their photos and get a good chuckle out of the whole thing.

There is another parade of birds going on in Beverly Hills, CA tonight but it's not ducks, it's peacocks and America isn't really laughing it's either gagging or -if your as empty headed as the peacocks- you're "ogling" at their perfumery.  They all make me sick, and they have for a long time. Long before the Trump phenom. I'm glad that much of the rest of the country now sees them for the pontificating, self-congratulating, hypocritical, empty-headed twits they truly are. What animal eats peacocks ? I know- Harvey Weinstein also known as Meryl Streep's God.

Have a great one !
Posted by Marshall in the Middle at 8:45 AM