Mueller Investigation- They Searched for Cigarettes but Hoped for Heroin 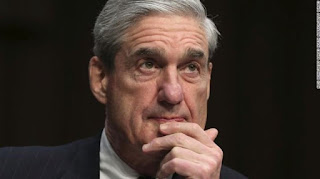 The unfortunate Robert Mueller- In Charge of the Wild Goose Chase


We should all be breathing a sigh of relief that the Mueller Investigation conjured up by the the Democrats did not reveal a treasonous president, right ?  Well, anyone watching the mass media these past two weeks knows that the Democrats are NOT relieved at all.  They are not relieved  because they weren't really looking for collusion in the first place.  They were looking for a reason to impeach President Trump and they used "collusion with a foreign government" as an excuse to keep looking under every rock for something more damaging.  Collusion with a foreign government is not illegal, it's simply inappropriate.  I liken the Mueller investigation to searching someone's home looking for cigarettes but hoping to find heroin.  They didn't find cigarettes 'nor heroin.  The Republicans, on the other hand, are doing a victory dance because the Democrats and their minions at CNN, MSNBC, CBS, NYTimes, et al...  have been made to look like fools, once again.

So, congratulations Republicans for another win under the President you hold your nose and love;  President Donald Trump.  He continues to win and I am not tired of this economy, that's for sure.  My comfort and satisfaction in life is a consequence of a vibrant economy as it is for the majority of Americans.  The fact that Trump is a blunt speaking, unpolished, un-presidential ogre is a  minor irritation that I have learned to live with.   Neither I 'nor the vast majority of Americans is under the illusion he is another Lincoln or Reagan.  He gets things done and helps to bolster the individual's ability to succeed.  That is at least as important as eloquence, in my humble opinion.  For now, anyway.  In the end, my fellow Americans, WE are in charge.

I am not relieved that Trump was found innocent of treason because I never thought he was guilty in the first place.   I knew it was another example of political, partisan nonsense.   The main premise of the Mueller investigation was that Donald Trump could not have won if it were not for the Russians helping him.  How could they have helped him ?  Do they have a knack for marketing to the American public that nobody else has ?  The 2016 election had billions of dollars thrown into it,  but somehow the fact that the Russians met with Trump and they spoke with him caused his victory ?   Trump helped the Russians "stir the pot" on Facebook and Twitter because normally Americans get along fine and dandy regarding politics ?   Is it that the American public is a bunch of idiots and this time they "got it wrong" because the crafty Russians fooled us all?   It's all so mind boggling stupid.  All Americans must understand that this was not a real investigation into Trump's dealing with Russians but it was a partisan attack with the very real intent to find something to bring down a duly elected President.   No,  I'm not relieved or happy I am livid !  I am "pissed off" not for the benefit of Donald Trump but for the way our government has become a three-ring circus of liars, greed, avarice,  and clowns.  The mainstream media are the ring masters of this treasonous sedition against the American people.

Posted by Marshall in the Middle at 10:36 AM