The Problem is the Parties 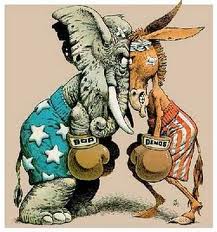 After watching the debacle that happened in Washington, DC for the past several weeks (over the debt ceiling), I am more firmly convinced than ever that the political parties are the reason our government is not working.  Maybe there was a reason for their existence at one time, but today they are a throwback and the partisan process of running a government simply doesn't work.  Absolutely nothing gets done, and all fresh ideas are squashed by the opposing party.

The solution?  We need Independents to gain more influence in the government.  If the Independents control the reigns of power there is more likely to be communication.   Fresh ideas will have a much better chance of being acted upon.  Independents would break the gridlock between the two parties (Republicans/Tea Party and Democrats/Socialists) and help give fresh alternatives from any political philosophy a chance.  Yes, we would finally have compromise, and that is not a dirty word.

Second, we need leaders !  I don't know how to get middle of the road, fair minded Independents to step up as leaders,  but the I's need to start getting together to discuss possible leadership.   That's the real challenge is that the I's by nature aren't interested in agreeing with a herd of cattle.  But, for the good of the country we have to agree that we don't agree on everything other than all Americans have the right to be heard and America deserves much better than it has been getting this past 10-20 years.

Third, the process of government is now skewed and monopolized by the parties.  The entire process of government revolves around them as if  they are the sun and anyone outside their circle is but a pale moon, a substandard satellite.  Eliminate the old, established "way of doing things" that the two parties have set up for themselves,  the processes that are conducive to their stranglehold on power in our nation's capitol.

Spread the word., drop out of the parties.  The fewer members they have, the less likely they are to keep screwing up our country with their juvenile bickering and partisan politics.


The biggest problem in politics is the political parties., they've forgotten they are there for all Americans and to represent American interests not any one way of seeing things. There is no plurality, there is no compromise, and it's " my way or the highway". Very dangerous situation and reminiscent of totalitarian regimes going back through history including Nazis and Communists.
In my humble opinion,

Chuck Marshall
Posted by Marshall in the Middle at 11:16 PM