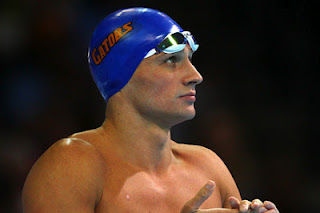 A writer for the Orlando Sentinel (well, actually the Tribune company, so he may be in Chicago... I don't know) wrote an article on Friday, August 3 in which he disrespected my fellow Gator, and Olympic hero Ryan Lochte with a nasty little article implying he's nothing more than a self-satisfied playboy and that his 2 Golds, 2 Silvers and 1 Bronze at the London Olympics are not to be cheered.  Like most Floridians, I've been proud to see Ryan on the international scene, rivaling the mighty Michael Phelps and as a University of Florida alumni (like myself) it's all the more compelling to root for Mr. Ryan.  "Jeah!".  Not only a fellow Floridian and Gator but also half Cuban like my kids !   What's not to like !  So..... when I read this babbling, catty article by David Haugh, you all know faithful readers that I couldn't just "let it go".  The Orlando Sentinel was kind enough to print my letter of protest yesterday, Saturday August 4.


"Lochte hardly failed even next to Phelps"

Regarding David Haugh's column "Another golden day at Olympics" on Friday about Michael Phelps and Ryan Lochte: I was disgusted by the bitter commentary on Lochte's so-called failure for bringing home "only" five medals (two gold, two silver and a bronze).
He even went so far as to say that "we may never look at Ryan Lochte the same again." I have been proud to watch a citizen of Florida demonstrate such tenacity in competition and such grace and class in loss (if you can call silver and bronze medals losses).
His close friendship with Phelps seems sincere, and all Americans should be proud that two rivals showed the world what friendly competition can look like.
Although both swimmers certainly have different personalities, both are also well-known contributors of time and money to children's charities, and I don't agree that one can be held above the other regarding scruples, as Haugh implies.
Please stop trying to make everything into good versus bad, moral versus immoral, right versus left and for once focus on that which binds us together during these Olympics — that we are all Americans, and we should be proud of Phelps, Lochte and all the Olympians who do their best in London this summer.

Wow. I had no idea that was happening. The need to completely tear down the people with whom we have disagreements has gone too far, and this is another example. What is wrong with people?