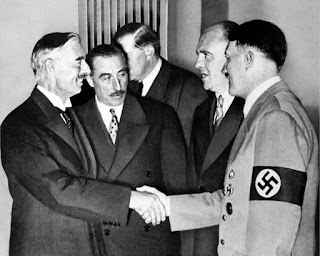 Neville Chamberlain returned from Germany waving his treaty proclaiming "Peace for our Time".

I've come to a conclusion about the President;  the crux of his approach to terrorism is to not insult potential terrorists.  Notice how nearly all his arguments for what he's doing are that anything we do in contrast would risk "enabling  ISIL to recruit more terrorists".   From the bombings in Paris to the shootings in California his  reaction has been the same.   It's like, "Well my goodness we sure don't want to upset people on the brink of wanting to blow us up !"   Am I the only one that thinks they would recruit just fine and dandy even if we didn't have Gitmo or even if we allowed ALL the Syrian refugees to enter the United States ?   It's this entire wimpy philosophy that depletes Americans.  Where's the leadership ?  I'm not saying we need to send 100,000 troops to Syria, but I am saying our country should not be bowing or bending over for these people "lest we stir the pot of American hatred".  If they hate us enough to join ISIS, then no American policy is going to soften their hatred.  Remember, we're discussing a group of people that can be convinced to kill us all.  How could any policy of the US government change their mind to like us instead ?   The policy of the United States matters not one iota to potential terrorists.  The only thing that might change any of their minds is for us to remove all our troops from the middle east and become an isolationist country.  Then, yes, they might decide we don't have to die... at least not just yet.

What brought this home to me was a news story today that mentioned Obama has refused to change his procedure at Gitmo of systematically releasing some of the less threatening prisoners from Guantanamo Bay.   He says all the information he has gathered has been that keeping Gitmo open only helps to recruit more terrorists.  Gasp !  Well, that's conjecture in my humble opinion, but releasing known terrorists to the wilds of the middle east is not conjecture.  It is a fact that these people will go home and plot to come back and kill us.  Make no mistake about that., Mr. Obama and I  say that with all due respect to you and your desire to do "the right thing".  Placating evil does not work.  It didn't work for the Nazis and it won't work for Jihadists.  Your weak approach only emboldens them to come after us even harder.  These people smell weakness in your policy like a shark smells blood in the water.  They're circling and they're ready for a feeding frenzy.  Chamberlain gave Hitler Czechoslovakia but only one year later  he marched into Poland.    Evil cannot be placated.