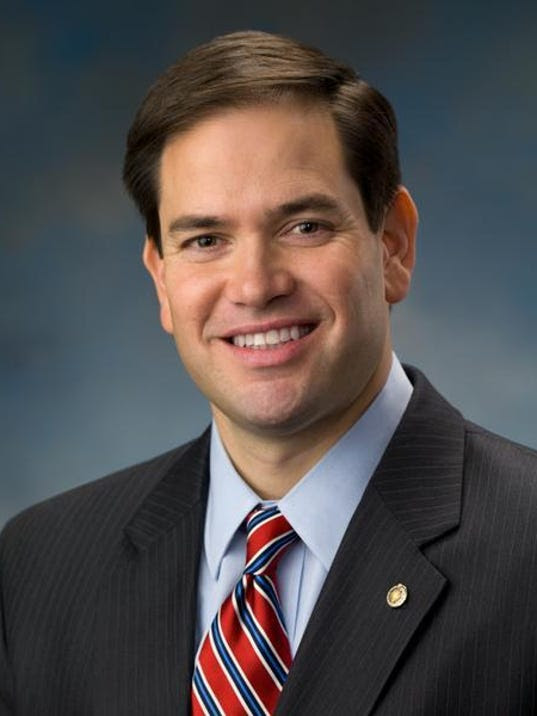 So, here's why I think this should be;

I have never seen a candidate with such quick answers, and with such consistently effective debating abilities,   He knows what he is talking about regarding foreign affairs and the way our government works.  His knowledge is encyclopedic.   You cannot run this country effectively and/or turn it around from its chaotic path  if you are just a "slick politician".  We have had too many of them !  I see Marco as just plain smart with sterling leadership skills.

Some people say he speaks too fast.  I think he just has a lot to say and only few minutes to say it. Notice Ted Cruz has no problem pausing.  Why?  Because he has nothing intelligent to say in the first place.   Besides, everyone in Florida knows Rubio just has a Miami accent.  They speak fast when they're excited.  They are Latin and they talk fast !    Relax folks,  he slows down in "one on one" interviews.

He speaks Spanish.  That might not matter to a lot of the  lily white Republican party members, but it is going to make a huge difference in the general elections when Marco can answer questions in heavily Latin communities while his opponent cannot.  And don't tell me Ted Cruz speaks Spanish !   All you have to do is look at a video of the last debate with his sloppy counter-attack to Rubio's comment about his lack of Spanish skills with a garbled sentence in Spanish.  What was that ?   It sounded like a 8th grader reciting a dialogue in Spanish class !


He has a telegenic smile that will wilt Bernie Sanders or Hillary Clinton.   If you want the Republican candidate over the Democratic candidate then you want Marco Rubio.  Who would, in contrast, want to look at Bernie Sanders' bottom teeth for the next four years ?   In addition, I think it can only help our country if the President is liked by people.  The President is a salesman,.  He sells our country to foreign countries, he sells his ideas to Congress.  You cannot sell anything if people despise you.  Look what has happened with Obama, "the community organizer".  Obama has never understood that he is essentially a salesman.,   He has been under the mistaken idea that he is our King.   What has the King gotten done?   Practically nothing unless you count his "executive orders" that circumvent the  constitution and can be easily deleted by the next President.   The President must be liked and he must sell his ideas to Congress and the opposing party in order to be effective.

Donald Trump?  You can say a lot of things about Donald Trump but I believe "likable" is not on the list.   Who in their right mind believes he  has a chance against either Democrat? According to a recent poll   Donald Trump is disliked so intensely by the American public that over  65% stated they would  NEVER vote for him under any circumstances., and that includes 40% of Republicans !     Let us just pretend he does make it to the White House.  Get ready for another 4 years of nothing getting done as Donald Trump pisses off Congress, the states, the banks, Wall Street,  the courts. etc...  With that ego he will not back down either and he will hold a grudge as we have all seen.  It would make the last 6 years of a deadlocked government look like the good ole days !   What about Ted Cruz ?  He is probably the most despised man in Washington, DC and that is widely agreed -even he admits it and wears it as a badge  of honor.  But  you must keep in mind that NOTHING WILL GET DONE if Ted Cruz is President !


Marco Rubio has discussed many intelligent approaches to fixing our government.and our country.  Real ideas, not political rhetoric !  He has constructive, inventive and creative ideas to get things accomplished.   I see him as being .able to bring the government back together to start making the USA work again.  He is conservative, but he is a pragmatic conservative.   I have heard him discuss ideas for fixing issues that normally Democrats take credit for;  helping the poor to help themselves,  cleaning and protecting the planet with pro-business solutions, education shaped  for all kids not just the kids that want to go to a University.  Perhaps, most impressively to me, he is suggesting a constitutional convention for all the states to meet in DC and start fixing some of the issues regarding our bloated and ineffective government.  Marco can fix it., I truly believe that.


Whoever suggests Marco has no experience is ill informed.

"Marshall in the Middle" officially and enthusiastically endorses Marco Rubio for President of the United States.


Posted by Marshall in the Middle at 9:50 PM

Email ThisBlogThis!Share to TwitterShare to FacebookShare to Pinterest
Labels: Marco Rubio for President