Free Press is Not the Enemy But Biased Media Is 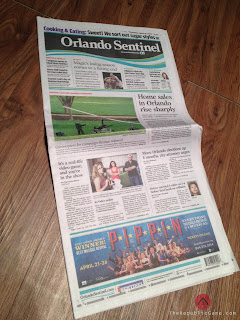 Well, after my tirade this past week regarding the media I still  wasn't satisfied, so I felt compelled to send a letter to the paper (the illustrious Orlando Sentinel) but I don't think they'll print it.  It's a little too "bombastic" and "provocative" which they tend to shy away from.  I don't take it personally, they have to be careful to a certain extent. and they've been very generous with me printing around 7 out 10 of the letters I do send them.  Very flattering,  I must admit !   I actually consider our local paper to be only moderately "left leaning".  It is  reasonably balanced and its most liberal articles tend to be fed from the Washington Post and the LA Times and lately the Associated Press (which I've lost respect for as they've recently jumped on the "We hate Trump" bandwagon).   The Orlando Sentinel even endorsed Mitt Romney in 2012 !

Interestingly, President Trump tweeted this week that the media is not his enemy but that they are the enemy of the people.  This did, of course, send the mainstream media into a "tizzy" as many of you have probably already seen.  The actual tweet specifies CNN, ABC, CBS, NBC, Failing New York Times, and Washington Post.  Was that a good idea ?  I've learned not to doubt anything Donald Trump does,  and I would say it was certainly typical of him.   The CNN's of the world took his simple tweet and turned it into him being an "enemy" of the free press which he DID NOT imply and they know that.  They proved his point in their reaction.   They proceed to distort the truth and blatantly combat the decision of the American people.  As my blog yesterday outlined, and the letter below states;  I agree with him.

There is no self examination.  There is no introspection.  They are sharks in the water and they seem to have lost themselves in all this frenzy.   Their ugly gnarled teeth are out and open for all to see.  I understand Trump is a great disappointment to them but I sincerely believe they are committing slow suicide as they are relentless in their berating of a freely elected President.   They would be wise to step back to the middle and focus on facts and truth and avoid "creating the story".   A truly good  journalist or news organization should pursue the truth and inform and they should work hard to be politically moderate.  The political prism tends to  distort the facts and consequently the story.  People aren't stupid, and they can sense partisan journalism as is evidenced by the horrible statistics regarding the news media today.  I think it's around 60 to 70% simply don't trust them.  How can you build an audience with that fact staring you in the face ?

So, anyway... here is my letter this week and since  I doubt they'll print it, I hate to let a good letter to to waste !!    If they print it, I'll make a note below in the next few days.

"There is an evil more dangerous and frightening than any terrorist I can think of because a bomb that sneaks in will do harm to one unfortunate city or community,  but this rampage from the far left, led by the media, tears and insults at the heart of all Americans.   It is the height of arrogance to reveal such a low opinion of 63 million Americans that they voted wrong and that the media, Hollywood, and Academia  know better what's good for our country.  I have no problem with criticism of the President, even when he hasn't really been given a chance.  That's what he signed up for.  What I do have a problem with is the power play I see coming from the media.  They feel they are entitled to insult this revered American institution of a free election with open bias and hostility towards the President and consequently the citizens who voted for him.  They show more compassion for foreign refugees than struggling Americans.  They insult America by doubting its decision.  I believe a free press exists to seek and find the truth and to record history not  rule the people and create history.  The other branches of government will keep the President in check.  The press has assumed power that is not rightfully theirs. "

Have a great week, loyal readers and don't forget to click an ad  !

Posted by Marshall in the Middle at 8:19 AM