American Borders - Declarations of an Independent 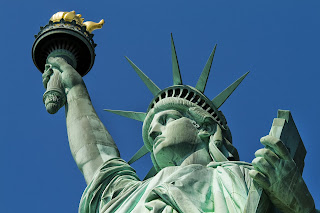 This past week there was a massive protest all over the USA regarding immigration to the USA.    In a nutshell- the protests were aimed at the Federal government's policy of enforcing laws that dictate when an illegal family comes into the USA that the parents be separated from their children as the parents are processed for a court hearing.  Our immigration laws are very screwed up and these children are the unfortunate victims of the lunacy.

Here are some facts regarding Immigration all Americans should probably know.

1)   Over 75% of immigrants in the USA came here LEGALLY.  They waited their turn, that includes my wife.  Do you know the anger you feel when someone cuts in line in front of you and gets away with it ?  That's how my wife sees illegal immigrants.  They're cutting in line in front of people who are going through the legal process to immigrate to the USA.

3)  Why write a law if you have no intention of enforcing it ?  The answer is either incompetence or mischief and with today's Congress it's almost always both.

4)  Legislation making our immigration laws more sensible, fair, understandable, and responsive while still protecting our country's sovereignty is the goal.  Congress legislates.  It's Congress we should be shouting at, not the President.

5)  There is NO country in the world with "open" borders.  The reason for borders is to maintain the safety, spirit, unity and ambitions of a country's citizens.  If you don't have borders you don't have a country.   We should have open borders like we should leave the doors of our homes and businesses unlocked at night and then expect to wake up with everything being just "fine and dandy" in the morning.

6)  The United States has the largest immigrant population in the world at 45 Million.  Of that,  there are 11 million that are NOT legal.   So, the USA is not against immigrants.  It's actually very welcoming to immigrants, unless they're illegal.  The rule of law matters here.  Read number 7.

7)  The United States is a Republic, not a Democracy.  The idea behind a republic is that if everything blows from public opinion as in a true Democracy,  you essentially have "mob rule".  Mobs do not rule.  They dictate, threaten, and often get violent with spittle flying out of their "mouth- breathing" faces.  If you don't like a law then elect leaders that you think will change the law.  That's  how a Republic works.   Screeching at the President and "racist America" is futile to the ends you pursue.  In fact, it would be easy to argue that it actually hurts your cause.

What's the solution ?  Compromise between the parties and  a new logical law written by Congress.  It's really not complicated but in today's hyper-partisan environment, there is no such thing as logic.  The Idiot parties, as in most problems of our country today,  are totally ineffective at governing.  So, really the solution is to neuter the parties and remove them from power.  We deserve better than this.


Posted by Marshall in the Middle at 8:21 AM