By Chuck Marshall
(This post takes under 3 minutes to read) 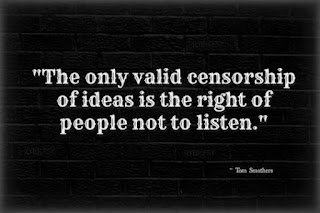 As I have written this blog over the past several years I've always tried to see both sides of any  point of view.  Sometimes, I really don't, for example I never understood President Obama's reluctance to call Islamic terrorists, Islamic terrorists.  If they terrorize people and they are doing it in the name of Islam, then the term seems appropriate.   From the other side, I still get frustrated that "climate change" (previously referred to as Global Warming)  is considered a "scam" by the right.  I don't see why scientists would lie about it.   I am somewhat cynical towards the matter mainly because the media has picked up on "climate change" as a sure sign of the end of times and their vapid hysterics has caused me to reconsider the matter.  I never hear more evidence, only hyperventilating when we have hurricanes.  My experience has been that the Media will hide facts that question climate change if they should dare to arise from anyone.  There has been no open debate.  If you question it then you're an idiot.  Therein lies one of the most troublesome issues of our day;  the partisan media and their decision that they are to form the thoughts of the masses rather than inform us and let us make our own minds up.   I still believe climate change is an important matter to be researched and studied but I do understand the cynicism as well.

The loss of trust in our news providers over the last several years is a great tragedy and one of the reasons I write this blog.  What drives me is the truth of matters and filling the gaps of truth in the news stories of the day.  That is why I've had over 50 letters published in the Orlando Sentinel because I catch the gaps of logic and/or honesty and they acknowledge the fact (kudos to the Orlando Sentinel, by the way,  for at least hearing me out !).  Most people are not inclined to exert effort regarding political issues because they have their own interests and passions and who has time to decipher the veracity of what's in the news ?   I love politics because I see the power that would come from a government that's well run,  so I'm  inclined to scrutinize their mutterings.   We will never have a well run government  if we continue to hear half truths and outright lies from those we've entrusted with our attention.

Today I think it's safe to say the media (with the big exception of Fox News) is very much tilted to the left and I am not going to elaborate on that because I've written about it several times in this blog.  Keep in mind I am not referring to cable news shows that are focused on opinions,  I am talking about news and concerns of the day.  I am also talking about social media like Facebook and Twitter where the opinions of conservatives are being muzzled as the news has indicated this past week.  One of the biggest disappointments this past few years has been how little the left considers that their counterparts on the right are not being allowed to express themselves fully and fairly.  If you believe in what you say then you should be open to the opinions of the other side.  Anything else is a form of tyranny and will only hinder our voyage to finally grasping the elusive "effective government" that I think we all crave.