You're Paying for the Defense of Europe 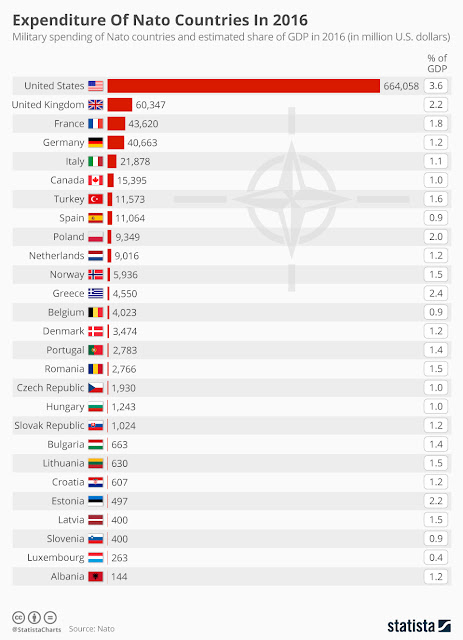 I, like many Americans was shocked to hear President Trump speak with such venom regarding the lack of money being submitted by our "allies" across the Atlantic for their own defense.  If you're not familiar, NATO stands for the North Atlantic Treaty Organization and is a consequence of the aggression of Russia (the Soviet Union) after WWII towards Western Europe.  Today the members include many countries of Eastern Europe that were once a part  the Soviet Empire, so it's a growing group that "rankles" the Russians.  The mission of NATO states that "an attack on one of us is an attack on all of us".   NATO was established in 1947.  There are now 29 nations that are a part of NATO.  These are our allies and all that is very good.  It is a good organization for maintaining the peace.

After Trump used such heavy handed, and admittedly rough language I got to wondering what the details of the situation were.  In an unusual moment of naivete, I decided to google search the term NATO Trump and "surprise, surprise" the mainstream media was having a hysterical fit over Trump's language towards our European allies.   "He's lying" they kept saying and their hatred for the man was hardly containable so much so that they spent a lot of effort elaborating on how the other leaders body language revealed that Trump was "distancing" our country from Europe and he was left behind speaking to the leader of Turkey (?) while the group walked, "like an outcast high school student" (yes, they really used that term).    I wish I could go to the news media and get the information I need without having to google search the details and understand the story.  It's up to us to sort it all out because we're living in the "Age of Incompetence".   I finally googled "USA Financial Contributions NATO", and one of the first things to come up was an article by CNN MONEY from July 2016 listing out how out of balance the NATO contributions are.  Their own article supports what Trump is saying today !

Anyway, we Middle class Americans are generally too busy making a living and taking care of our families to be obsessing with global politics enough to understand the nuance of how NATO works.  Trump said "They aren't paying their fair share" and "they owe us", which technically is NOT true but if you're explaining what's going on to most people in a 3 minute news clip, this is the only way to communicate the facts.  He isn't speaking to just the European leaders and the Anderson Cooper's of the world,  he's speaking to "Joe Blow".   I'm going to elaborate on this issue today because NATO funding is something I didn't understand either and I figure my loyal blog readers might gain something from it.  We're always seeking information and truth here at "Marshall in the Middle" !

"So what's going on?" you ask.  There are two separate things.  The funding of NATO itself is not a lot of money as it's simply to maintain the "bricks and mortar" of the HQ in Brussels, Belgium.  It  does run into a few Billion $$ per year.  The USA pays 22% of that.  That's for the organization that defends Europe.  We're not in Europe.

The second thing is the actual armies. The defense of Europe through soldiers and guns falls on all NATO members.  Each member is  supposed to spend 2% of their nation's GDP (Gross Domestic Product, in other word's their economy's $$ volume of output) towards their OWN defense as a way of "doing their part", so to speak.  The graph above shows just how that's playing out.  The bottom line is that they aren't paying for their own defense.  They are leaving much of it up to the USA.  In addition, they haven't been paying their fair share for a long time.  The total is easily in the hundreds of billions of dollars, probably even Trillions if you go back to 1947 and include all countries involved.  So, when Trump says they "aren't paying their fair share" and that "they owe us" it is essentially true, but you see it's not technically true - the fact of the matter is there's no way to explain it without writing a paragraph like I'm doing here.  But, he's right !  The USA pays 67% of the total defense of  NATO in a sense because we're  paying for the military that is most likely to protect NATO;  the American military.  Last year, 2017 that figure was $664,000,000.   It can be said, that indirectly, the USA spent more for the defense of itself and Europe than all other NATO members combined.  Europe has 1 Billion people  USA has 320 Million, and once again, we're  not in Europe.  Finally, keep in mind the generous social programs of our socialist European friends.  I'm sure they can afford a lot of goodies since their military defense is not an obligation they need to concern themselves with.

So, I'm all about defending the world's Democracies against tyranny and invasion and working to right all the wrongs of the world,  but that there is some "major bullshit, ya'll"......In My Humble Opinion.


Posted by Marshall in the Middle at 1:03 AM