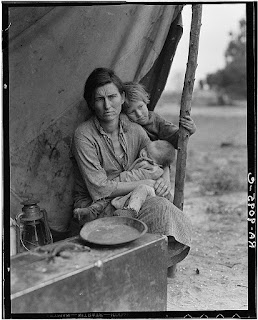 The Great Depression
So, today we have a federal government that has grown to proportions of debt that are not sustainable.  The national debt stands at around $24 Trillion and there is no end in sight.  That's equivalent to $69,000 for every human being in the United States.  Our leaders spend money as if there is no consequence to the debt.   I ask ;  "How could never-ending spending have no consequence" ?   Surely, there are consequences.  And, this begs the question;  "What would national bankruptcy look like ?"   I'm not an economist but most likely a world-wide depression would result with catastrophic consequences for our children and grandchildren including widespread poverty, war and disease.  (Read "The Grapes of Wrath" or watch "Cinderella Man" if you want to get a slice of depression era life)
There are other consequences right now;
1)  The government creates an agency for every conceivable problem thus making that problem permanent.  Why permanent ?  Because where's the motivation for those directing or working for that agency to fix the problem ?  If you're successful you're putting yourself out of work.  So, they grow and grow and grow.   Like a massive corporation that solves no problem and builds nothing.  Never is there an end game.
2)  The federal government spends money for wars, foreign support,  social welfare benefits, the arts, public buildings, university research, etc.... (the list could go on and on quite a bit)  with no attention to the economies of these endeavors and without bringing in money to cover the expense.  It simply spends money that's not its own.  Indeed, it spends money that does not exist hence the $24 Trillion of debt.    In addition, as with the problem with agencies above - what's the end game to all this ?   Is there an intention to fix the problem and find solutions or to simply spend as much money as possible ?
3)  They wage wars and send our young people across the oceans to be killed and maimed in wars that often do not involve us directly and always cost quite a bit of money.  The Iraqi War cost several Trillion dollars alone.   Is spending trillions of dollars on a foreign nation's internal problems really worth it ?  Nation building is not in our constitution.  There have been exceptions in history, such as in standing up to the horrors of Nazism but that is rarely the case for the wars here in the 21st century.  There are other ways to influence the world with American integrity and decency that do not involve our young people getting butchered on foreign soil.
4)   They don't raise taxes because it would cost votes.   They don't suggest minimizing social welfare because that would cost votes.   Certainly no reduction in our military because it never seems to be a good time and...... would cost votes !   So, nobody is willing to do the hard work and make the tough decisions because it's easier not to.
The national debt is but one problem.   The scope of the federal government's size is so large that protesting its actions seems hopeless.  Along with that enormous size comes enormous power for all involved.  The tentacles of such a powerful government can reach into many aspects of our lives, and with the onset of social media and the internet, it's even easier to "control" what people are allowed to hear.   So many elections have produced the same "do nothing" politicians that ally themselves with one of the major parties and nothing gets done  It's a never ending argument between them with the American citizen as the unfortunate victim.
In addition, many of our national leaders seem to get suddenly wealthy after working in the capital for a few terms.   I have no proof of nefarious actions but it certainly doesn't make sense to send people to DC who very quickly find financial benefit.  They leave their home states with bright eyed concepts of "fixing things" only to morph into the sleaziness of our modern day Rome- Washington, DC with its bureaucrats and corporate lobbyists who make them mysteriously wealthy.    "This is for the benefit of the American people" they seem to convince themselves.  Especially the American people sitting in the halls of Congress- Mad King George again !  Is that being a representative ?  It's all farcical !
In My Humble Opinion.  CM
Posted by Marshall in the Middle at 7:28 AM