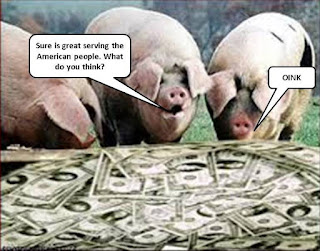 "Mad King George"- Hard at Work
So, what's to be done ?    Hopefully the previous three parts of this blog have outlined the problem of federal government that's out of control and the many consequences of such power.  The 50 states have the ability to remove a lot of that power,  especially the power to spend but also the power to legislate within each state according to the tastes and customs of each state.    Why do we have laws preferred in California applied to the citizens of Georgia if the people of Georgia are offended by that law ?   We're 50 separate states for a reason.   In fact, the advantages of spending and laws springing from the state level would be an opportunity to truly visualize what works and what doesn't work for the governing of our people.   A convention of states would allow the most peaceful and effective way to drive power out of Washington, DC and back closer to the American people.  Best of all,  there's no work to be done to set up this "day of jubilee".    There's  no need for revolution,  or civil war,  or riots in the streets until our leaders hear our demands.  It's already in the constitution under Article 5.
There are many ideas for Amendments to hold power in check at the federal level.  An organization exists for moving forward on the Convention of States and they have a list of tentative objectives for the first Convention.    The link to their organization and it's list of objectives is at the end of this blog.  This is not the only idea 'nor the final decision because Article 5 is owned by the people not any one organization.  But we need a path to go, so if it be this particular one then so be it.   The COS Action has the most established track for what this blog is elaborating on.   It's a start.  As Winston Churchill famously said "It is not the end, it is not the beginning of the end, but it is perhaps the end of the beginning".
The "powers that be" at the federal level of government , corporate and special interest  (ie, "Mad King George") will argue all day against such a thing.  Indeed I'm sure they would love to delete Article 5 altogether.   Remember, it's not just our government leaders but all those who benefit from unlimited trillions of dollars.    The fact is,  our Congress is a tool of all the pigs that feed at the trough of American bounty.   This idea, the COS,  threatens the smooth path to legislation that the special interests (think litigation legislation, medical legislation, corporate, etc...) have become so wealthy and comfortable with.   Moreover, these multi- national corporate interests are owned and operated by people and groups who are not necessarily interested in American liberty and justice.   You see, the corporate multinationals would  no longer have an easy path to legislation that favors them.  Why not ?   Because our leaders are no longer "for sale" if reelection is limited to one or two terms.  Imagine, they can actually start doing their job !  The media detests this idea because the power will no longer be cradled in Washington, DC but will be as significant in the state capitals making their job much harder and of much less influence.  Importantly, remember, the media giants are all owned by large multinational corporations who are beholden to a lot of things, but not the American people.   They will shriek ; "This will ruin us".   It will ruin them,  is what they mean.  "Mad King George" fears for his head, and he should.
Take the time to glance at the COS website below and join or contribute if you feel strongly enough.  The people must get their power back and that will only happen if real decisions tend to be made at the local level not the federal level.  The future of our children, grandchildren and all of posterity depend on it.
https://conventionofstates.com/
In My Humble Opinion.  CM
Posted by Marshall in the Middle at 7:12 AM