The Age of Incompetence: Part Two 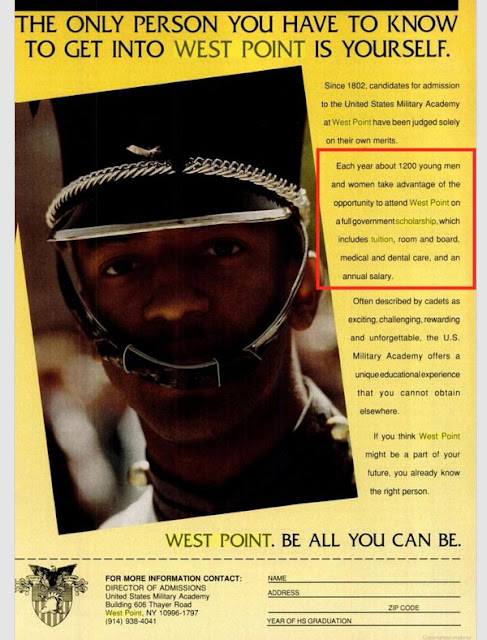 The media has outdone themselves today and they look more asinine than they did on CNBC for the last Republican debate.  Who knew they could top themselves so quickly !   Politico- the political web site for those of you unfamiliar-  came out with a story stating that Ben Carson had "fabricated" his experience as a high school senior while in the Detroit ROTC where he was in a position of high leadership (this is not the fact being questioned- that would be the case in a NORMAL story questioning a potential leader).   In his book, they explained,  he wrote that he was complimented  by General Westmoreland himself at a banquet and he was encouraged to apply to West Point and "was offered a scholarship".   Carson turned him down because he wanted to be a Doctor.  This is, of course, what happened and would seem to be the key fact here.    Politico was elaborate in commenting that he "couldn't have been offered a scholarship because West Point doesn't offer scholarships".  The headlines were then all over the Internet  "Carson lied about being offered a scholarship to West Point".   Carson later explained that he was offered a "position" to come to West Point in conversation, ie "Your performance  at the Detroit ROTC has been exemplary, I think you would have no problem getting into West Point, or being offered a position to go there".   In other words, he didn't clarify but there really is no word for "getting a position" at West Point and even their marketing uses the word "scholarship" as the reader can see in the image above.  The real story;  Carson exaggerated the details of his offer to apply to West Point.

Politico also attacked Carson for even claiming any admission to West Point because "West Point has no record of him applying".  In his book Carson never claimed to apply to West Point, he was simply making a point that he had risen to the enviable position of being offered a likely position at the prestigious academy.   Why would he apply to West Point if he had already said he wanted to be a Doctor ?   Later today it was discovered that West Point doesn't keep any record of who did or did not apply that far back so ...... the conclusion?   Politico lied about checking the details of Carson applying at West Point.   To sum it up., Politico got caught doing what they were accusing Carson of doing., and that's not an exaggeration it's slander.

All at the same time., our friends at  CNN "discovered" that Ben Carson may have "fabricated" the "narrative" in his book regarding details of himself as a 13 year old while growing up in a Detroit ghetto.   My first thought is;  "everybody did weird things when they were 13 years old, but what was he hiding?  What did he fabricate?"   He fabricated that he threatened a friend with a knife and he fabricated that he threatened his mother with a hammer over a pair of pants.   Keep in mind he didn't say he never did those things, he lied by saying he DID do those things.   Huh?  So, he was lying about tending towards violence in his youth... when really he was NOT violent ?   He was  being dishonest because he was actually a mellow, law abiding citizen as a 13 year old.   I've heard a lot of bizarre stories in my 52 years but this is one of the most bizarre.  Les médias est plus incompétent que je l'imaginais !

If this is all they can find on Ben Carson then he has got my vote friends....

* Why is this title in French ?  Click the link to L'age de l'incompetence - Part 1" under the heading "Popular Posts"  to  the right of this page to find out.  Have a good day.

Posted by Marshall in the Middle at 10:44 PM